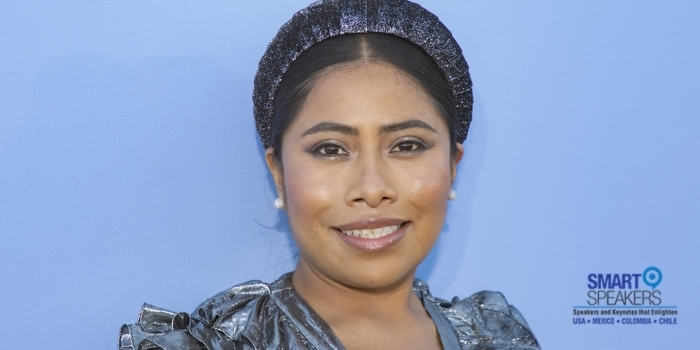 Yalitza Aparicio, the 2019 cinematographic phenomenon, is the first indigenous woman nominated for an Academy Award and the second Mexican woman ever nominated for the Oscar for Best Actress for her role in Alfonso Cuarón’s “Roma”.

Trained as a primary school teacher, Yalitza Aparicio auditioned for Alfonso Cuarón’s Roma almost by chance. Since the day she was cast for the role of Cleo, she has intentionally used her new platform to advocate for gender equality, indigenous rights, and the rights of domestic workers. Her work has challenged the power structures present in the media and the film industry.

In March 2019, Yalitza Aparicio spoke at the International Labor Organization (ILO) of the United Nations as the keynote speaker for International Women’s Day, discussing the need to treat domestic workers with dignity and respect in partnership with the National Domestic Workers’ Alliance (NDWA) in the U.S., the Centro de Apoyo y Capacitación para Empleadas del Hogar (CACEH) and Semillas in Mexico. She is also the face of the ILO’s Fight Racism campaign, launched March 2019. Furthermore, Yalitza’s and Roma’s campaign helped pass a Labor and Social Security law in Mexico protecting the rights of domestic workers.

In May 2019, Yalitza Aparicio was presented with a Changemaker Award by the Coalition to Abolish Slavery and Trafficking (CAST). That year, Yalitza worked with the Mexican Commission for the Defense and Promotion of Human Rights to narrate the animated short “Arbitrary Executions.” Yalitza works to make her messages of equality inclusive, especially to children: she has appeared on Sesame Street Mexico with messages of empowerment.

Yalitza Aparicio has positioned herself as a cultural advocate for the communities of Tlaxiaco, of Oaxaca, and of Mexico itself. She is the ambassador of the annual Oaxacan cultural festival La Guelaguetza, which is strongly rooted in the indigenous traditions of the region. In her short career, she has overcome virulent responses of racism, classism and misogyny that erupted in response to her sudden fame, and above all has used her new platform to tirelessly promote tolerance, respect, and dignity for all people.

An Evening With Yalitza Aparicio (Spanish)