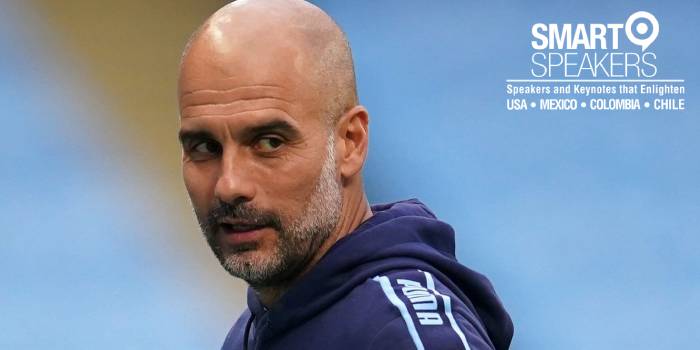 Famed soccer coach who, with his innovative methodology, has led iconic teams like Barcelona, ​​Bayern Munich and Mancheter City to total success. He is considered one of the best coaches of the current era.

Josep “Pep” Guardiola is a former football player and famous manager. Pep started his playing career in Barcelona youth academy at the age of 13. Playing as a defender, Guardiola was noticed by the head coach of the first team Johan Cruyff and introduced into the senior squad at the age of 20. He became a pivotal defender in the Barça Dream Team of the 1990s that claimed 6 La Liga titles, 4 Spain Super cups, 1 European Cup, 1 UEFA Cup Winner’s Cup and 2 UEFA Super Cups. Overall he appeared in 479 matches for the team in 12 seasons and was perceived as one of the most reliable defensive midfielders of his time.

Guardiola was appointed Barcelona B manager in 2007; though only a season later he accepted an offer to coach the senior side. The start of his spell in the team was marked with major transformation as the tactician got rid of the most important players. The new squad constructed by Pep performed brilliantly both in domestic championship and in Europe and won treble that included La Liga title, Copa del Rey and the Champions League. Later the club clinched the Supercopa de España, the UEFA Super Cup and Club World Cup. Guardiola became the first manager to win six titles in a season with one team. He is also the only coach in Barcelona history that outplayed Real Madrid in El Clásico five times.

During his 4-season stint in el Barça, Guardiola did not only collect 14 titles, but also developed particular playing style that amazed football fans throughout the world.

After the 2011/2012 season Guardiola resigned from Barcelona and joined the Bayern Munich starting from the summer 2013.

Guardiola won the Bundesliga title, DFB-Pokal title, as well as UEFA Super Cup and Club World Cup titles in his very first season with Bayern. He is currently the manager at Manchester City.

Pep Guardiola One of the Best Team Talk