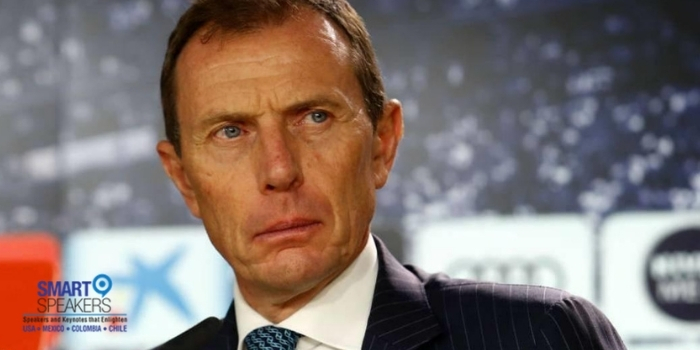 Emilio Butragueño is a football genius and a Real Madrid legend who turned football into an art form.

Emilio Butragueño is a football genius and a Real Madrid legend who turned football into an art form. His dribbling was simply out of this world and his goals were the stuff of dreams. His intelligence on the pitch was too much for the brute strength of defenders and he turned the game into something sublime. His nickname (the ‘Vulture’) came to represent one of the best generations of players in the history of Real Madrid and Spanish football when, along with Sanchís, Míchel, Martín Vázquez and Pardeza, he led the famous ‘Quinta del Buitre’ (‘The Vulture Squadron’’).

Emilio Butragueño’s vision of the game and his ability to improvise led scouts from Atlético de Madrid to try to sign him, but Butragueño and his father were members of Real Madrid and he wanted to play for the team he supported. That’s why he eventually signed for the Real Madrid youth team.

While Emilio Butragueño was playing for Real Madrid Castilla, his name started to appear on the front pages of newspapers. His goal scoring statistics were already spectacular and Alfredo Di Stéfano called him up to the first team and he made his full debut on the 5th of February 1984 in Cádiz. He came onto the pitch wearing the number 14 shirt and turned the game on its head by scoring two goals and making a third.

Emilio Butragueño made a decisive contribution to winning the UEFA Cup two years running (1985 and 1986) and his performances in this competition earned him recognition from all around Europe. He also won the ‘Bravo Trophy’ for the best Under-24 player on two consecutive occasions. Along with Hugo Sánchez he was part of a legendary attacking duo for many seasons at Real Madrid.

For 12 years Emilio Butragueño was a regular for the team and without being an out-and-out goalscorer he won the Pichichi Trophy. Butragueño retired as a Madrid player on the 15th of June 1995 in a testimonial against Roma. The Bernabéu showed their gratitude for his dedication to the Whites and left thanking the club he had loved as a fan and a player and that he still loves today.

As a keynote speaker , Emilio Butragueño uses the experiences he has lived to convey the importance of values such as teamwork and commitment to achieve the goals we have set (in sports and in life). All this, with the sobriety and humility that have always characterized him and speaking from the legitimacy granted by having been part of high-performance sports and managerial teams.