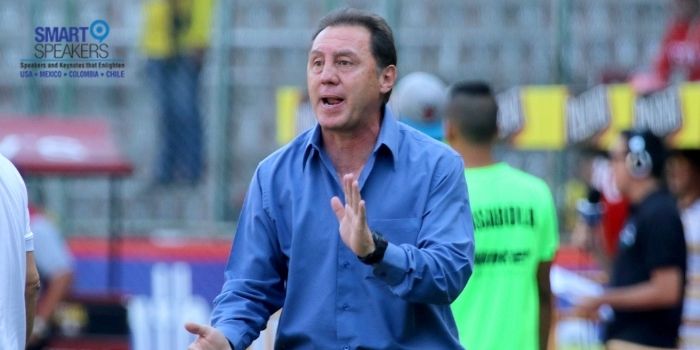 Alex Aguinaga is a keynote speaker and Technical Director. A renowned soccer player from Ecuador, he stood out for being the main midfielder of the Ecuadorian National Team for several years and is considered the best soccer player in the history of soccer in this country.

Alex Aguinaga, an acclaimed speaker and athlete is a native of Ibarra, Ecuador. Since his foray into the lower divisions of the Ciudad de Quito Soccer School, he stood out as a scorer and demonstrated his great soccer skills. In the final of the respective South American championship that year he would score two goals, and from that moment on he would make the important decision to change his position from forward to midfield.

In 1985 Alex Aguinaga was part of the Ecuadorian Soccer Team in the South American Sub 17 Tournament, held in Argentina. There he would stand out as the second top scorer of the tournament with 10 annotations, after the Bolivian Marco Antonio Echeverry. Surprisingly, the Ecuadorian team would be in third place, behind the great teams of Brazil and Argentina.

Alex Aguinaga would stand out in the 1989 Copa América, held in Brazil. From his hand the Ecuadorian team would become the revelation team of the first phase, defeating the previous champion: the Uruguayan team. This outstanding presentation would make Ecuador's 10 listed on the international market, being sought after by clubs of the stature of Milan, Real Madrid, Middlesbrough, and even Barcelona itself. But due to an accelerated negotiation, the "teacher" would take a step in the same American continent, in Mexican soccer. His career would continue this course at the Necaxa club.

The indisputable talent of Alex Aguinaga would be demonstrated thanks to the successes achieved during 14 years in Mexican sports. We can name his three league championships, a Mexico Cup, a Mexican Super Cup, the Concacaf Champions Cup and a third place in the 2000 Club World Cup. All these titles earned him the award as the best player in Mexico in the 90s.

After his retirement, Alex Aguinaga has served as Technical Director in Ecuador, a position that has allowed him to share his wisdom and talent to the new generations of soccer in his country. His passing through Barcelona in Ecuador, and in 2015 his mission to raise the level of Deportivo Cuenca are challenges that demonstrate the knowledge and professionalism of this symbol of soccer in our continent.