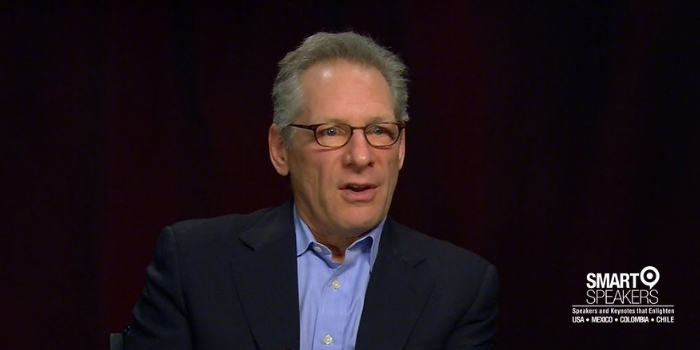 Stew Friedman is an organizational psychologist at the Wharton School of the University of Pennsylvania. He founded Wharton’s Work/Life Integration Project in 1991 and is also an in-demand speaker, consultant, coach, workshop leader, and public policy advisor.

Stew Friedman is an organizational psychologist at the Wharton School of the University of Pennsylvania, where he has been on the faculty since 1984.  He worked for five years in the mental health field before earning his PhD from the University of Michigan. He also founded Wharton’s Work/Life Integration Project in 1991.

Stew Friedman has been recognized by the biennial Thinkers50 global ranking of management thinkers every cycle since 2011 and was honored with its 2015 Distinguished Achievement Award as the world’s foremost expert in the field of talent. He has been listed among HR Magazine’s most influential thought leaders, chosen by Working Mother as one of America’s most influential men who have made life better for working parents, and presented with the Families and Work Institute’s Work Life Legacy Award.

While on leave from Wharton for two-and-a-half years, Stew Friedman ran a 50-person department as the senior executive for leadership development at Ford Motor Company. In partnership with the CEO, he launched a corporate-wide portfolio of initiatives designed to transform Ford’s culture; 2500+ managers per year participated. Near the end of his tenure at Ford, an independent research group (ICEDR) said the LDC was a “global benchmark” for leadership development programs.

At Ford, Stew Friedman created Total Leadership, which has been a popular Wharton course since 2001 and is used by individuals and companies worldwide, including as a primary intervention in a multi-year study funded by the National Institutes of Health on improving the careers and lives of women in medicine and by 135,000+ students in Friedman’s first MOOC on Coursera.

Stew Friedman’s research is widely cited, including among Harvard Business Review‘s “Ideas that Shaped Management”. He has written two bestselling books, Total Leadership: Be a Better Leader, Have a Richer Life and Leading the Life You Want: Skills for Integrating Work and Life, now being taught as a MOOC on Coursera.

In 2013, Wharton School Press published Stew Friedman’s landmark study of two generations of Wharton students, Baby Bust: New Choices for Men and Women in Work and Family. Work and Family – Allies or Enemies? was recognized by the Wall Street Journal as one of the field’s best books.

Winner of many teaching awards, Stew Friedman appears regularly in business media (The New York Times cited the “rock star adoration” he inspires in his students).  Friedman serves on a number of boards and is an in-demand speaker, consultant, coach, workshop leader, public policy advisor (to the U.S. Departments of Labor and State, the United Nations, and two White House administrations), and advocate for family-supportive policies in the private sector.

This world-renowned program produces demonstrable results.  It is based on Stew’s bestselling book and award-winning course, Total Leadership.

Based on the book (co-authored with Alyssa Westring), Stew provides evidence-based guidance for working parents on how to design a career and family life based on core values, cultivating a community of support in all parts of life, and experimenting to discover better ways to live and work.

Leading the Life You Want

This program shares practical lessons from the riveting life stories of six remarkable people and the surprising fact that they became leaders of significance because (not in spite) of their commitments to family, community, and the private self.

Building Trust to Enhance Your Reputation

This session demonstrates the incredible power of asking for help on initiatives you are taking with the intent to serve others.

This session teaches how to get past the inhibitions that hold people back from acting to create coalitions for positive change.

New Choices for Men and Women in Work and Family

This program reveals rich insights and sounds like a call to action from a 20-year longitudinal study comparing Gen Xers and Millennials.

The Architecture of Successful Learning Communities

This session offers a unique opportunity for those engaged in the challenges of building learning communities that last and that bring demonstrable value to their organizations to learn from one of the modern masters of the craft of action learning. 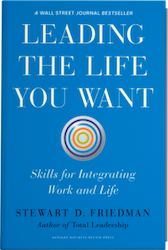 Leading The Life You Want: Skills For Integrating Work And Life

According to Friedman, the idea that “work” competes with “life” ignores the more nuanced reality of our humanity—the intersection and interaction of four central domains: work, home, community, and the private self. The goal is to integrate these areas harmoniously instead of thinking only in terms of trade-offs. It can be done. 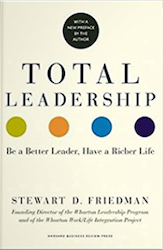 Total Leadership: Be A Better Leader, Have A Richer Life

Total Leadership, now used in training and educational systems by organizations and schools world-wide, is a game-changing blueprint for performing  well as a leader not by trading off one domain for another, but by finding mutual value among all four. It can be done! Stew Friedman shows you how to achieve these "four-way wins" as a leader who can be real, be whole, and be innovative.

Professor Stew Friedman on Total Leadership: Be a Better Leader, Have a Richer Life

Leading the Life You Want | Stew Friedman | Talks at Google

Total Leadership: Be a Better Leader, Have a Richer Life | Stew Friedman | Talks at Google