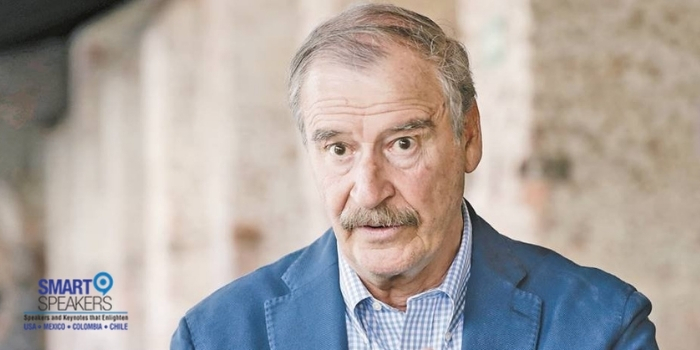 Vicente Fox is a Mexican businessman who was President of Mexico from 2000-2006 under the National Action Party (PAN). He is also the Co-President of the Centrist Democrat International, an international organization of Christian democratic political parties.

When elected to the presidency of Mexico in 2000, Vicente Fox broke the stranglehold that the ruling Institutional Revolutionary Party (PRI) had held on the State for seven decades. A charismatic reformer, President Fox is credited with playing a vital role in Mexico’s democratization and with strengthening the country’s economy. During his tenure, he succeeded in controlling inflation and interest rates, and in achieving the lowest unemployment rate in all of Latin America.

After studying at the Ibero-American University in Mexico City and taking courses administered by the Harvard University Business School, Vicente Fox joined the working world and began driving a truck for the Coca-Cola Company in 1964. He was quickly promoted, and soon became the youngest executive to ever be appointed president of Coca-Cola for Mexico and Latin America. Under Fox, Coca-Cola surpassed Pepsi as Mexico’s top-selling soft drink.

Since leaving office in December 2006, Vicente Fox has kept in the public eye by speaking in countries such as Nigeria, Ireland, Canada and the United States about topics such as the controversial 2006 election and the Iraq War. In Mexico, Fox’s busy post-presidency caused much criticism because former Mexican presidents have been expected to stay out of the political spotlight. Nevertheless, Fox stated “There is no reason to hold to the anti-democratic rules of those who still live in the authoritarian past…now that Mexico is a democracy, every citizen has the right to express himself, even a former president.”

In his book, Revolution of Hope, Vicente Fox outlines a new vision of hope for the future of the Americas. He speaks out forcefully on hot global topics like immigration, the war in Iraq, racism, globalization, the role of the United Nations, free trade, religion, gender equity, indigenous rights and the moral imperative to health global divide between rich and poor nations. From the man who brought true democracy to Mexico, Revolution of Hope is a personal story of triumph and a political vision for the future. 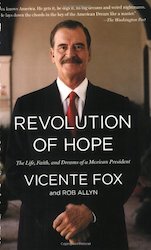 Revolution of Hope: The Life, Faith, and Dreams of a Mexican President

President Fox candidly reveals the ups and downs of his relationships with world leaders from George W. Bush and Tony Blair to Fidel Castro, Vladimir Putin, and Hugo Chávez. He also speaks out on hot global topics such as immigration, the war in Iraq, racism, the United Nations, free trade, and the moral imperative to heal the global divide between rich and poor nations.