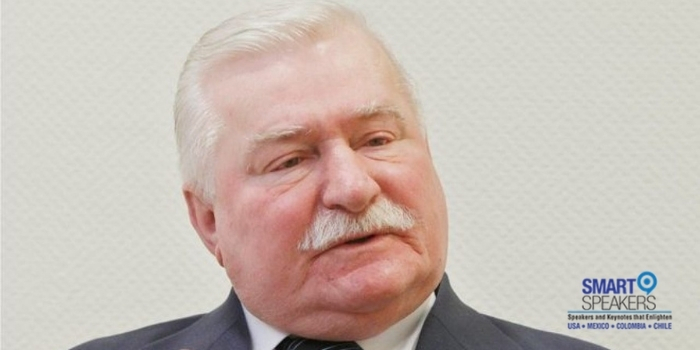 Lech Walesa is a Polish politician, trade-union organizer, philanthropist and human-rights activist. In 1990 he became the first democratically elected President of Poland.

Lech Walesa is a Polish politician, trade-union organizer, philanthropist and human-rights activist. A charismatic leader, he co-founded Solidarity (Solidarność), the Soviet bloc’s first independent trade union, won the Nobel Peace Prize in 1983, and served as President of Poland from 1990 to 1995. Walesa went from electrician to union leader to, in 1990, becoming the first democratically elected President of Poland.

The first mention of Lech Walesa’s dissident activities goes back to 1968, when he encouraged his fellow workers at the Gdansk shipyard to boycott the official rallies condemning students’ strikes. From that time on, he started to be increasingly active in social affairs in Poland. He actively participated in the Strike Committee during the 1970 protests. He was offered the post of the President of the Committee.

Lech Walesa's stance, tenacious negotiations, and campaigning for the strikers’ demands led to the establishment of the Solidarity Free Independent Trade Union. It was the first bloodless victory in Polish history. This was also the time when the eyes of the entire world were on Gdansk and Walesa. The totalitarian regime reacted to those developments by introducing martial law in December 1981. Walesa was among the first individuals to be interned. Two years later, he was awarded the Nobel Peace Prize.

By the end of the 1980s, Lech Walesa sat down to negotiate with the Communist authorities at the Round Table as the head of the delegation of the democratic opposition. His determination and courage led to a compromise with the already weak but still dangerous Communist regime. The compromise resulted in the elections of 1989 and the establishment of the first non-Communist government on the eastern side of the Iron Curtain.

Today, Lech Walesa continues his mission as the spokesperson for solidarity. He travels around the world, retelling the story of the Polish experience and the non-violent struggle for peace and democracy. Through his lectures and dialogue with young people, he calls for the building of a modern world founded on universal values. Being a supporter of globalization and seeing the opportunities offered by new technologies and the development of civilization, he encourages the establishment of new structures of peaceful cooperation between nations.