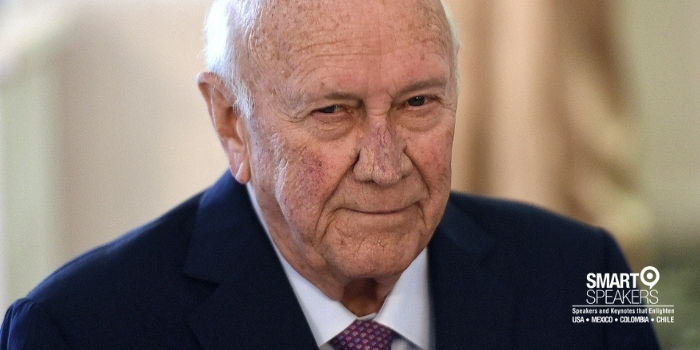 FW de Klerk was President of South Africa 1989-1994 and Joint Winner of the 1993 Nobel Peace Prize. He is best known for the role he played in transforming South Africa into a non-racial democracy.

During his presidency from September 1989 until May 1994, FW de Klerk dismantled apartheid and initiated and presided over the inclusive negotiations that led to the adoption of South Africa’s first fully democratic Constitution in December 1993. Also in 1993, together with Nelson Mandela, he was awarded the Nobel Peace Prize.

After the election on 27 April 1994, FW de Klerk served as one of South Africa’s two Executive Deputy Presidents until 1996, when his party withdrew from the Government of National Unity. He retired from active politics in September 1997. In 1999 he published his autobiography, "The Last Trek - A New Beginning" and established the FW de Klerk Foundation.

The Foundation upholds the Constitution through its Centre for Constitutional Rights and promotes unity in diversity by working for cordial inter-community relations and national unity. FW de Klerk is also the Chairman of the Global Leadership Foundation, established in 2004, whose panel of former presidents, prime ministers and statesmen provides discreet advice to heads of government on issues that concern them.

Make the right decisions in an unpredictable world

The same leadership principles used by de Klerk to end apartheid in South Africa are still needed today, and he enlightens the public with his unique perspective on current events.

The Klerk and Mandela partnership

In this engaging lecture, de Klerk offers a first-hand, behind-the-scenes look at the story of two public opponents who worked to bring peace and a new beginning to their entire country.

Closing the gap: globalization without isolation

By emphasizing the need for rich nations to help the underdeveloped world, Frederik de Klerk addresses global conflicts that affect the interests of all of us.