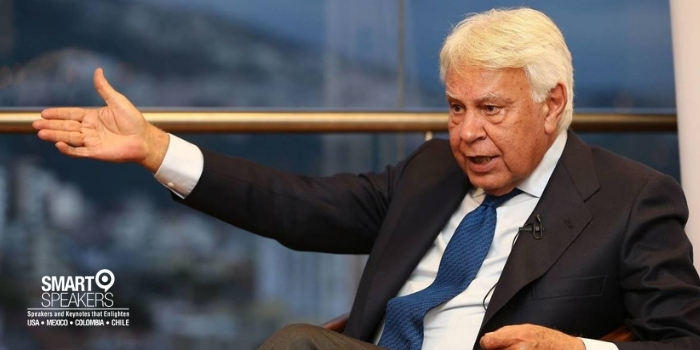 Felipe González Márquez is Former President Spain, who spent the longest term in power during the democracy. He has been one of the great pioneers in developing relations between Europe and Latin America, always advocating the improvement of the relationship between the two regions.

Felipe González Márquez was the President of Spain for fourteen years. His governance was marked by enormous reforms: making free public education available to everyone up to the age of sixteen, creating more opportunities for access to university and providing a comprehensive Social Security system. He also carried out a huge industrial restructuring process, as well as reforms to the army, by making its members professional. On the international front, the cornerstone of his policy was Spain’s accession to the European Union in 1986, along with its relationship with Latin America.

As well as undertaking advisory work and collaborating regularly with journalists, Felipe González Márquez is the President of the Global Progress Commission of the PSOE (Spanish Socialist Worker’s Party), which is involved in stimulating debate and creating a new platform for ideas and proposals for political action which confront current challenges and problems.

In 2007 the Council of Ministers appointed Felipe González Márquez Ambassador Extraordinary and Plenipotentiary for the celebration of the Bicentenary of American Independence, which began in 2010. Also in 2007, the Heads of State and Government of the European Union at a meeting of the European Council appointed him President of the Reflection Group on the Future of Europe, known as the Committee of Wise Men, which was dissolved after the relevant report was submitted. Additionally, González is a member of the European Steering Committee Our Europe, the International Council of the Shimon Peres Centre for Peace, the InterAction Council, the Club de Madrid and the Círculo de Montevideo.

Felipe González Márquez has published several books such as Mi Idea de Europa, Un estilo ético (My Idea of Europe: An ethical approach) and El futuro no es lo que era (The Future is Not What it Used to Be). He has also written the essays El socialismo and Memorias del futuro (Socialism and Memoirs of the Future).

Felipe González Márquez’s political work has been recognized on several occasions. He won the prestigious Charlemagne Prize for his contribution to European unity, the Carlos V Prize in 2000, awarded by the European Academy of Yuste, Spain; the Collar of the Order of Isabel la Católica; the Great Golden Cross for Merit of the Republic of Austria and the Order of the Quetzal with the rank of Commander from the Republic of Guatemala, among other distinctions. He also holds Honorary Degrees from the universities of Toulouse and Lovaina. 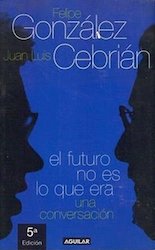 Written from a changing perspective of the understanding of Spain, it’s the story of two people of our time about a country that wants to be more modern. From the situation of the monarchy to globalization.