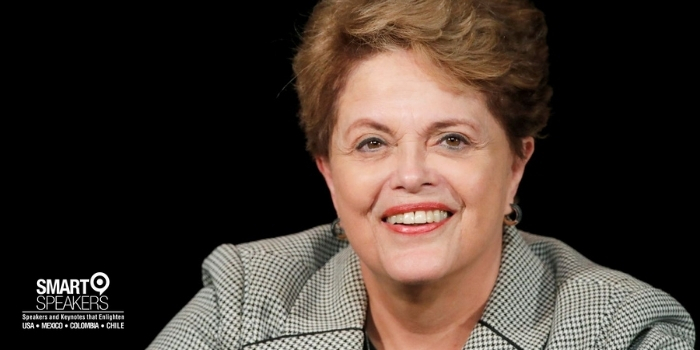 Dilma Rousseff is an inspiring Brazilian politician and the first female President of Brazil, recognized for her international work in the promotion and defense of Human Rights.

Dilma Rousseff is the first female President of Brazil. During her Presidency, she focused her agenda on ensuring the country's economic stability and job creation, as well as reducing poverty. Internationally she focused on guaranteeing respect for Human Rights and peace, promoting a non-interventionist policy. Anti-corruption bodies were also strengthened during her term, and Rousseff also initiated a commission to investigate disappearances and human rights abuses during the military dictatorship in Brazil. She left office in 2016 after a controversial and much politicized impeachment process, which came a year and a half after her re-election as President.

Dilma Rousseff’s relationship with the Partido dos Trabalhadores (PT) began in 1999, when she joined Lula da Silva's Presidential Campaign Cabinet. During Lula's tenure, Rousseff was Minister of Mines and Energy and President of the Administrative Council of the State-owned oil company Petrobas. Later, she went on to become the President's Chief of Staff and was chosen by Lula to succeed him as the Presidential candidate.

Dilma Rousseff began her political career as Secretary of Finance for the City of Porto Alegre and later, as Secretary of Energy, Mines and Communication for the Brazilian State of Rio Grande do Sul, amongst others. As a Minister and then as President, she helped create BRICS and cooperated with a number of Latin American, African, Middle Eastern and Asian countries.

In her formative years, Dilma Rousseff was an active member of various political organizations and she vociferously opposed the Military Dictatorship that devastated Brazil between 1964 and 1985. During this period of opposition, in 1970, at the age of 22, Rousseff was arrested on charges of subversion, and she was tortured during the three years of her imprisonment. After her release, she graduated in Economics from the Universidade Federal do Rio Grande do Sul.

Her experience working on the front line of the economic powerhouse of Brazil gives Dilma Rousseff a unique position and valuable insights into the current and future political and economic landscape of Latin America, its international projection, the role of emerging powers in the new global order and crisis management. In addition, as a vigorous campaigner against Human Rights abuses, she is recognized as one of South America's most respected politicians in the promotion and defense of Human Rights.