Andrés Pastrana Arango is the former President of Colombia (1998-2002) whose tenure was characterized by peace talks with different guerrilla groups and the reactivation of the economy and the financial system.

Andrés Pastrana Arango was the President of Colombia from 1998 to 2002, following in the footsteps of his father, Misael Pastrana, who was president from 1970 to 1974. In the mid 1970s he founded a magazine called Guión and a television news program called Noticiero TV Hoy. As a regular news anchor he became a nationally known figure. In 1982 he formally began his political career, gaining a seat on the local Bogotá Council. During that period he specialized in press articles on the production and trafficking of cocaine, for which he gained many journalistic awards.

Andrés Pastrana Arango was kidnapped on January18, 1988 in Antioquia by the Medellín drug cartel, which was pressuring the Colombian Government into preventing the extradition of Pablo Escobar and other drug lords to the United States. He was found by the National Police a week later, and in March was elected Mayor of Bogotá, a position he held until 1990. He gained notoriety by strengthening security and reducing crime. He then retired to private life – speeches writing etc. until he was elected President in 1998.

In 2005 Colombian President Uribe, who had been a critic of Andrés Pastrana Arango’s peace process with the FARC and had received criticisms from Pastrana regarding his negotiations with Colombian paramilitary groups, surprisingly offered the former President Pastrana the post of Ambassador to the United States in Washington D.C. which he accepted as a mark of his patriotism at a time when Colombia and the U.S. were renegotiating Plan Colombia.

Andrés Pastrana Arango attended the Colegio San Carlos and did a Postgraduate Program in the United States. President Pastrana sits on many international public and private sector Boards and is a well known international speaker. He has received numerous awards and recognition for his many contributions. 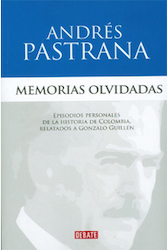 The former president of Colombia, Andrés Pastrana Arango, gives an account of important episodes in the recent history of his country, which occurred between 1983 and 2002, of which he was the protagonist. These events are narrated in an entertaining way, accompanied by revealing data that the author has collected and saved over the years, that he only dares to tell until now and that have caused a stir in Colombian public opinion. 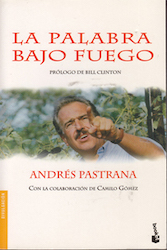 From the point of view of the manager and protagonist of one of the most dramatic and controversial political processes in the recent history of Colombia, former President Andrés Pastrana Arango delivers in this book an exciting chronicle of negotiations with armed groups, the recovery of the country’s image and international economy, the restructuring and modernization of the Military Forces and the development of Plan Colombia are interwoven - for the first time - with anecdotes and situations unknown to public opinion until now, which will undoubtedly shed new light on those critical years in Colombia’s history.