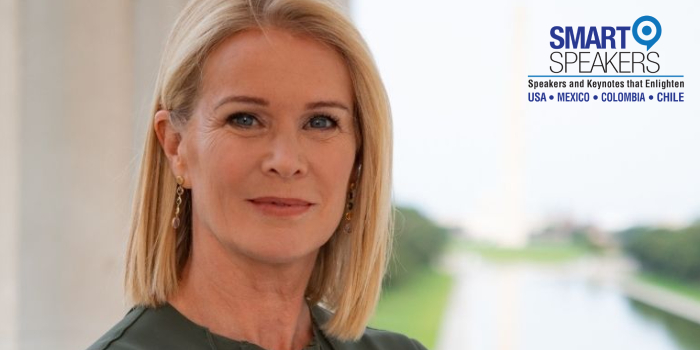 For a world reeling from the impact of the coronavirus pandemic, Washington-based BBC News anchor Katty Kay brings a sorely-needed fresh perspective on the state of American politics, the economy, and global affairs. Katty’s insights reflect a global mindset that is a natural offshoot of having grown up in the Middle East and her work as a journalist in Europe, Africa, and Asia before coming to Washington in 1996.

The award-winning journalist is an anchor for BBC World Newswhere her weekday evening broadcasts provide an update on Washington politics and global affairs to an enormous audience worldwide. Katty is also a regular guest and substitute co-host of MSNBC’s Morning Joeprogram. When she’s not busy making sense of the news from Washington and around the globe, Katty writes on the art and science of women and self-assurance –helping them turn thoughts into action to master a more confident mindset. She is co-author of threeNew York Timesbestsellers (The Confidence Code;The Confidence Code for Girls; andWomenomics) andThe Confidence Code for Girls Journal: A Guide to Embracing Your Amazingly Imperfect, Totally Powerful Self.

Katty Kay has reported on sixU.S. presidential elections, financial crashes, wars, sex scandals, and much more. Katty is proud of the fact that the day after the Brexit vote in the U.K., she wrote an article on the five reasons Trump would win the Presidency. She is less proud of the fact that the day he declared his candidacy in June 2015, she said that would be the high point of his campaign.

Katty is co-author of two New York Timesbestsellers about women, success, and work. The Confidence Code:The Science and Art of Self-Assurance---What Women Should Know inspired women to understand that confidence –the lynchpin of success –is a choice; and Womenomics: Write Your Own Rules for Success examined the workplace revolution and inspired women to take control, dream big and discover a different way of weaving work into their lives –and in the process create more profitable companies with happier and more productive employees.After The Confidence Codewas released, parents everywhere asked Katty and her co-author Claire Shipman about confidence and girls. That led to three more books co-authored by Katty with Claire Shipman and JillEllyn Riley. The Confidence Code for Girls: Taking Risks, Messing Up, and Becoming Your Amazingly Imperfect, Totally Powerful Self, was released in April 2018 and debuted at the #1 spot on The New York Times bestseller list. The empowering, entertaining guide gives girls the essential yet elusive code to becoming bold, brave, and fearless.The follow-up, The Confidence Code for Girls Journal: A Guide to Embracing Your Amazingly Imperfect, Totally Powerful Self, is based on their in-depth research and will help teens and tweens tackle any challenge. And finally, Living the Confidence Code: Real Girls, Real Stories, Real Confidence, released in April 2020.

On the fun side, Katty had the distinction of being immortalized in pop culture in 2018 when her name was the answer to a question on the Jeopardy game show. In the same week, she was portrayed in a skit on the legendary Saturday Night Live show which satirized a moment from MSNBC’s Morning Joe program. 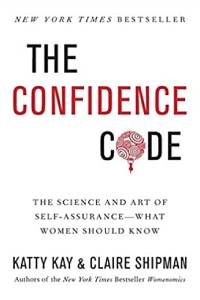 Following the success of Lean In and Why Women Should Rule the World, the authors of the bestselling Womenomics provide an informative and practical guide to understanding the importance of confidence—and learning how to achieve it—for women of all ages and at all stages of their career.

Working women today are better educated and more well qualified than ever before. Yet men still predominate in the corporate world. In The Confidence Code, Claire Shipman and Katty Kay argue that the key reason is confidence. 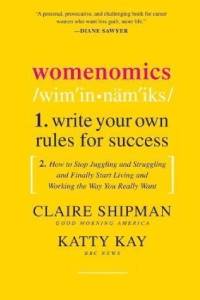 Womenomics, the groundbreaking New York Times bestseller by Claire Shipman and Katty Kay, is an invaluable guide for this generation of professional women, provide knowledgeable advice on how to “Work Less, Achieve More, Live Better.” Shipman and Kay, two TV journalists well acquainted with the stress of the workplace, describe the new economic trends that offer today’s overworked working women more professional and personal choices than ever before. At last, you no longer have to do it all to have it all—Womenomics shows you how.

Washington From a Different Angle

America has been rocked by COVID-19, the economic shock it created, and political polarization so deep it’s hard to imagine coming together on a way forward. The Biden administration will have a decidedly different approach to these challenges than Donald Trump. What are the odds President Biden will bridge the gap and make progress on the most important issues: jobs, the environment, trade, immigration, healthcare, and more?

The pandemic arrived three years after America began pulling back its global influence. New alliances formed in the vacuum and then the virus further reset relations between nations and within nations. The shift in global power structure caused by COVID-19 cannot be overestimated. Nationalism, already a force before the pandemic, increased not just in America but in most developed nations.

Confidence! With it, we can take on the world; without it, we don’t ask for raises, request that important meeting or take risks. In the success equation, research shows that confidence is even more critical than competence. But what is confidence? Where does it come from? Are we born with it or do we acquire it? And why do women have less of it than their talents deserve?

At the World Economic Forum in Davos, IMF Chief Christine Lagarde called the advancement of women the greatest economic opportunity of our time. She was recognizing what Katty Kay calls Womenomics, the extraordinary value of women in the workforce. Global studies show that companies who employ more senior women make more money.

Katty Kay has interviewed scores of political dignitaries and business leaders for her news broadcasts and at top live events. The skills, grace and humor she brings to the live stage as a panel moderator, discussion leader and interviewer help create memorable experience for the audience.

Katty Kay - Confidence is a Choice