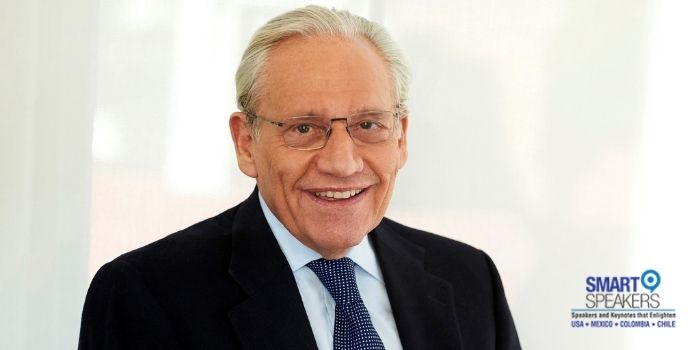 Bob Woodward is a legendary Pulitzer Prize-Winning Investigative Journalist, Associate Editor at The Washington Post and Author of 20 Bestsellers. In collaboration with Carl Bernstein, Woodward broke the deeply disturbing news of the Watergate scandal.

Bob Woodward is a top media speaker and a journalistic icon who gained international attention when he and Carl Bernstein broke the deeply disturbing news of the Watergate scandal.  The book they wrote, All the President’s Men,  won a Pulitzer Prize. Since the 1970s he has continued to define excellence in investigative reporting, receiving nearly every journalism award in existence.

Bob Woodward gained international attention when he and Carl Bernstein uncovered the Watergate scandal in 1973. Since then, he has worked to shine a light on the inner-workings of secret government. Woodward’s factual, non-partisan revelations to readers and speech audiences provide a view of Washington they’ll never get elsewhere. He has written about the last nine U.S. presidents and chronicled how the power of the presidency has evolved.

Bob Woodward has authored 20 bestselling books – 14 went to #1 – more than any contemporary nonfiction writer. His bestseller, Fear: Trump in the White House, is the deepest dive ever made into the first months of any American president. His 20th book, Rage, went behind the scenes of the Trump presidency like never before. Currently associate editor for The Washington Post where he’s worked since 1971, Bob Woodward has won nearly every American journalism award including two Pulitzers: one in 1973 for his work with Carl Bernstein on the Watergate scandal and the second, the National Affairs Pulitzer Prize in 2002, for the Post’s articles on the aftermath of the September 11 terrorist attacks.

No one else in political investigative journalism has the clout, respect, and reputation of Bob Woodward. He has a way of getting insiders to open up in ways that reveal an intimate yet sweeping portrayal of Washington and the political infighting, how we fight wars, the price of politics, how presidents lead, the homeland security efforts, and so much more.

The Weekly Standard called Bob Woodward “the best pure reporter of his generation, perhaps ever.” In 2003, Al Hunt of The Wall Street Journal called Woodward “the most celebrated journalist of our age.” In listing the all-time 100 best non-fiction books, Time magazine has called All the President’s Men, by Bernstein and Woodward, “Perhaps the most influential piece of journalism in history.”

As a speaker, Bob Woodward pulls the curtain back on Washington and its leaders to captivate audiences with stories that are sometimes surprising, at times shocking, and always fascinating. He blends stories that are both up to the minute and from the past (to provide historical context).

How We Got Here – Lessons From Ten Presidents 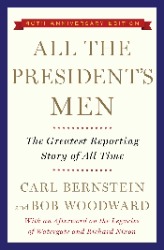 All the President’s Men

Beginning with the story of a simple burglary at Democratic headquarters and then continuing with headline after headline, Bernstein and Woodward kept the tale of conspiracy and the trail of dirty tricks coming — delivering the stunning revelations and pieces in the Watergate puzzle that brought about Nixon’s scandalous downfall. 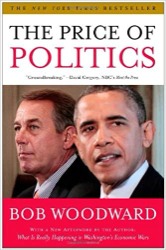 The Price of Politics

Based on 18 months of reporting, Woodward’s 17th book, The Price of Politics, is an intimate, documented examination of how President Obama and the highest profile Republican and Democratic leaders in the United States Congress attempted to restore the American economy and improve the federal government’s fiscal condition over three and a half years. 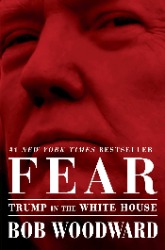 Fear: Trump in the White House

Fear: Trump in the White House was both a New York Times and International #1 bestseller. It broke the 94-year first-week sales record of its publisher Simon & Schuster and sold over two million copies its first three months in the U.S. alone. Fear is the most intimate portrait of a sitting president ever published during the president’s first years in Office. The focus is on the explosive debates and the decision-making in the Oval Office, the Situation Room, Air Force One and the White House residence.

What I learned investigating Nixon, and why it matters now | Bob Woodward | TEDxMidAtlantic