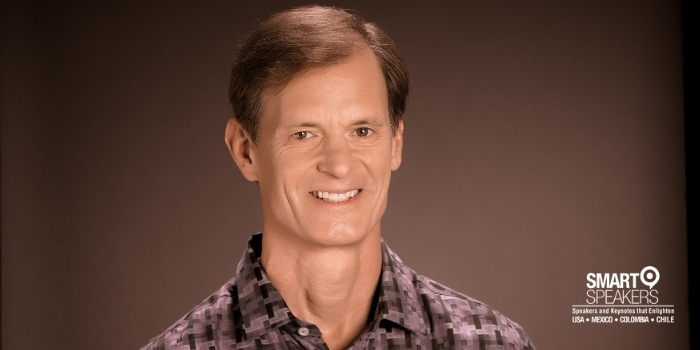 Mike Rayburn is a two-time TED Talk Presenter, an innovative entrepreneur and Hall of Fame speaker who uses world-class guitar and comedy to teach change and innovation to corporations world-wide.

Mike Rayburn has headlined Carnegie Hall, headlined in Las Vegas, and performed more than 5,000 presentations in 20 countries on five continents. Rayburn is a regular on Sirius/XM and morning radio nationwide. He has performed as guitarist with The Beach Boys and John Oates.

For years, Mike Rayburn was a nationally successful guitarist and comedian with degrees in Classical Guitar Performance and Music Business, voted America’s Campus Entertainer of the Year three times in four years. What most people didn’t know is that he has always been a personal development and success nerd, studying creativity and innovation, change and its effects on people, goals and performance.

A month after completing the first-ever cross-country concert tour on bicycle, an all-consuming question came to Mike Rayburn: What if he could combine his passions for guitar, comedy and message? Could he teach and illustrate the keys to change, innovation and profitability using guitar and comedy? If so, he knew he would be doing something truly unique on the planet, something no one else could do. With everything going his way, and at the height of his career as a national college circuit performer, Rayburn left.

Mike Rayburn studied, worked with coaches, went to Spain to learn new guitar techniques with Robert Fripp, and spent thousands of hours creating, testing, performing and honing the presentation called “The What If? Keynote Experience.”

In short order, Mike Rayburn was touring the world. His message and unique delivery were so effective yet so simple, that NASA invited him to present for their TED Talk event, where he was voted the top presenter. The message resonated. Companies began to experience sales growth by simply applying these tools. Individuals saw great improvements in their professional and personal lives.

For some, the “What If? Mindset,” as Mike Rayburn calls it, has been simply a better, a more creative way to go through the day. For much of the Fortune 100 including Wal-Mart, Exxon, Wells Fargo, UnitedHealth Group, State Farm, Nationwide, MetLife, Ford, PepsiCo, Comcast, Sony, Anthem, and countless others, it’s been transformational to the point of bringing Rayburn back multiple times.

So, Mike Rayburn continues. What’s ahead is manifold. He’s taking on new musical and performance projects. He’s creating an entire “Virtuoso Systems” online learning program to escort individuals and corporations to the results they want to achieve.

This keynote will give your leaders and teams the mindset to look at the landscape that everyone else sees, but find the opportunities that they’re all still missing, the tools to create and change instead of managing it, the vision to set a bold, inspirational new direction based on predictable opportunities, the inspiration to take action, to execute boldly while others wait.

You will learn three simple tools for harnessing your unrealized potential, creating and leading change, and becoming a virtuoso performer. You’ll hear amazing music including a solo guitar version of Bohemian Rhapsody.