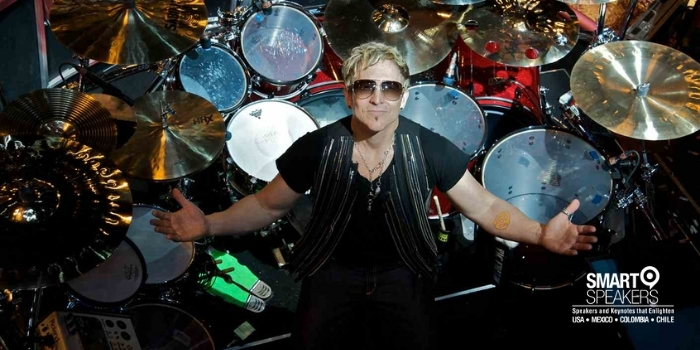 Mark Schulman is an extraordinary keynote speaker and a renowned drummer for some of the best musical artists, including Pink, Beyoncé, Cheryl Crow, Billy Idol and Cher. Schulman combines his entrepreneurial philosophy with his unforgettable musical experience.

Mark Schulman has enjoyed an unprecedented career for over more than 30 years as a first call drummer for world-class rock and pop artists. He was voted ‘Top 3 Pop-Rock Drummers’ in the Modern Drummer Reader's Poll in 2014 and was the featured cover artist in the May 2019 issue of Modern Drummer. Schulman has done four record breaking world tours with Pink and continues to work with her after 14 years.

Mark Schulman’s resume reads like a “Who’s Who” of international Rock n’ Roll royalty, including acts such as Cher, Billy Idol, Foreigner, Sheryl Crow, Stevie Nicks, Beyoncé and so many other world–class artists.  He has appeared on nearly every American, European and Australian variety show including The Grammys, David Letterman, The Tonight Show, Conan O’Brian, Jon Stewart, American Idol, Paul O’ Grady, X-Factor, Wetten Das, The Arias and more.

Mark Schulman is also a music producer, trained audio engineer and studio co-owner of West Triad Recording Studio in Venice, California. As an active educator, Schulman taught at the Los Angeles Music Academy and as one of the world’s most sought after drum clinicians hosting clinics in countries around the world.

Mark Schulman is a world-class private coach for corporate professionals, musicians, creatives and artists. With his help, you’ll elevate your performance, clarify your purpose and goals, break through your barriers and fears and transcend conventional beliefs and limiting thought patterns.

As a prolific keynote speaker, Mark Schulman has done extensive research, put together a state-of-the-art video studio and designed his virtual presentation to be as high-energy, performance-driven and audience-interactive as his live presentation.

Hacking the Rockstar Attitude!: How to Ignite Rockstar Performance During Uncertain Times

Mark uses three core principles during this kinetic and sensory-driven program. You will walk away with a blueprint for how to incorporate rock & roll philosophy, techniques and swagger into your business in order to drive performance and energize your work environment.

Mark brings his popular book to life at your event through engaging stories, performance and interactive processes. Mark demonstrates how all individual and team performances are broken down into three simple yet powerful steps: Clarity, Capability and Confidence. You will use these three simple concepts to drive you and your team’s performance to a higher level by transforming fear and trepidation in Confidence!

For organizations, leaders, and individuals, Mark will show you how you can boost your Rockstar Quotient for real gains in productivity, capacity, performance, innovation and morale. 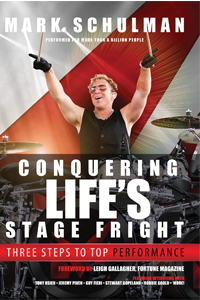 Mark Schulman has been the drummer for some of the greatest musical artists in history, including P!nk, Foreigner, Cher, Billy Idol, Stevie Nicks, Simple Minds, Beyoncé, Tina Turner, Velvet Revolver, Dave Koz and many more. In Conquering Life’s Stage Fright, through entertaining stories and innovative exercises, Mark reveals three core concepts that you can immediately employ to transform your anxieties into a confident, world-class performance.