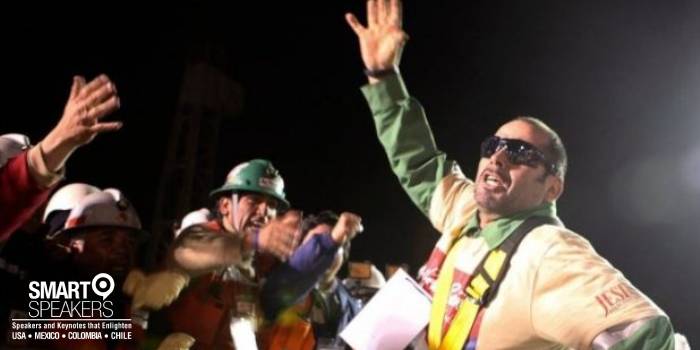 Mario Sepúlveda is the resilient leader of the group of Chilean miners trapped underground for 69 days after the collapse of the San José mine that culminated in the incredible rescue followed minute by minute around the world.

Born on October 4, 1970 in the city of Parral, Mario Sepúlveda grew up in a peasant family. When his grandmother died, he decided to visit new places in southern Chile. He went through many difficulties: the cold, winter, winds and extreme life situations that taught and gave him unique survival tools, which he never thought he could use.

At age 18, Mario Sepúlveda arrived in the city of Santiago, where without having a family or resources, he tried to defeat fate in search of a better chance at life. There he met his wife, who connected him with the world of mining, since his father worked there. After 16 years working in mining, he obtained important tools that led him to become a heavy machinery operator. This taught him to live with the intense work that means spending weeks and long hours inside a mine, with risks and sacrifices that become part of the day to day.

What happened in the accident at the San José Mine in 2010 was the greatest test that Mario Sepúlveda had to experience. However, he knew that he must endure this immense trial and move forward; for his family, for the future of his children, for the passion and love of life. On the 16th day being inside the mine, he decided to dedicate the rest of his days to the service of society. And that is how, even 700 meters underground, he began to devise and work with all his energies to shape what he is developing today.

With the energy and joy that characterize Mario Sepúlveda, on October 13 he emerged from the confinement that kept him underground for 69 days. Thanks to this, he has been able to share his experiences and deliver in every corner a message of hope, faith, love of life, companionship and work. Today, he communicates to the world how important it is to be aware of our essence as human beings, children, parents, siblings, and to be able to be a real contribution regardless of who we are. Today he gives back to the world for having been an accomplice and witness to this wonderful story that changed the course of his destiny.