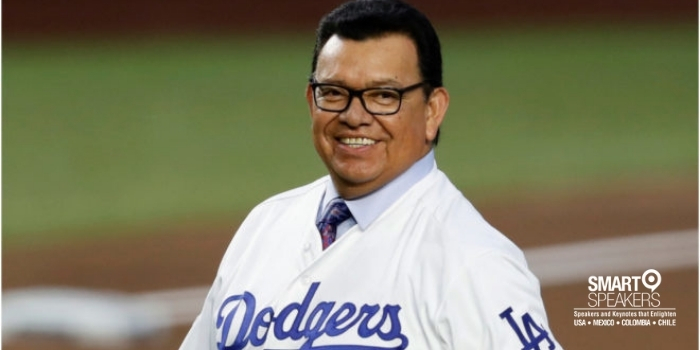 Fernando “El Toro” Valenzuela is the most famous and beloved Mexican Major League Baseball player of our time who unleashed the phenomenon known as “Fernandomania” throughout the United States during his years with the Los Angeles Dodgers.

Fernando “El Toro” Valenzuela (“the Bull”) is a Mexican professional baseball player whose career spanned 17 seasons in the major leagues of the United States.

Fernando “El Toro” Valenzuela was discovered in 1977 by Los Angeles scout Corito Varona while playing in the Mexican League. As a 20-year-old, Valenzuela caught the attention of fans when he pitched for the National League (NL) Los Angeles Dodgers in the opening game of the 1981 season and shut out the Houston Astros. Valenzuela finished the strike-shortened season with a record of 13 wins and 7 losses and led the league in complete games (11), shutouts (8), innings pitched (192), and strikeouts (180). He was named NL Rookie of the Year and became the first rookie player to win the Cy Young Award (given to the best pitcher in each league), while leading the Dodgers to the World Series title.

Fernando “El Toro” Valenzuela was so popular—a phenomenon known as “Fernandomania”—that attendance increased by an average of 9,000 fans whenever he pitched in road games. He became a cultural icon in the Latino community in the United States and a hero in his home country. Following the 1981 season, Valenzuela returned home to play the winter season with Navojoa in the Mexican Pacific League near his hometown, and Mexican fans filled the stadiums throughout the league to welcome him.

Fernando “El Toro” Valenzuela had a career record of 173 wins and 153 losses. His best seasons were 1981, his rookie year, and 1986, when he led the National League with 21 wins and had a league-leading 20 complete games. Valenzuela played 11 of his 17 years in the major leagues with Los Angeles. He also had brief stints with the American League (AL) California Angels and with the NL St. Louis Cardinals and Philadelphia Phillies, one season with the AL Baltimore Orioles, and almost three full seasons with the NL San Diego Padres.

In August 1996 Fernando “El Toro” Valenzuela was the starting and winning pitcher for the Padres against the New York Mets in Monterrey, Mexico, in the first regular-season major league game played outside the United States and Canada; from the ovation he received, it was clear that he was still a national hero in Mexico. In addition to his U.S. major league career, Valenzuela pitched for three seasons in the Mexican League and several more during the winter in the Mexican Pacific League. He joined the Dodgers’ Spanish-language broadcast team in 2003.