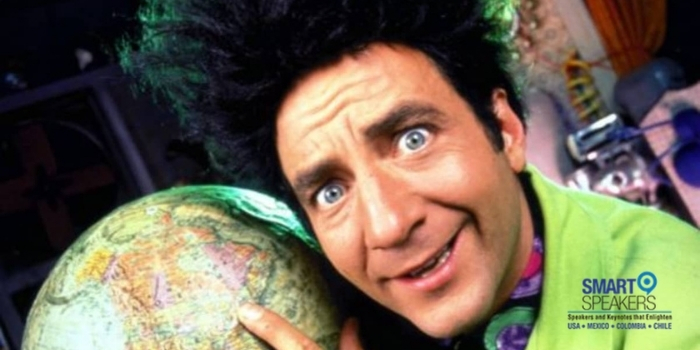 Paul Zaloom is a performance artist, filmmaker, puppeteer, and satirist who became a television icon of the 1990s for his role as an irreverent scientist on the show "Beakman's World."

Paul Zaloom is an American actor and producer best known for his starring role in "Beakman's World," a fun and educational television show that brought a generation of children to science during the 1990s. The show consisted of answering questions on complex topics with humor and entertaining experiments. It had a great impact in Latin America and Mexico specifically.

Additionally, Paul Zaloom is a performance artist, filmmaker, puppeteer, and satirist. He is the winner of an 'Obie Award' and has created fifteen solo exhibitions, including 'The Fruit of Zaloom', 'Zaloominations' and 'White Like Me: Honky Dory Puppet Show'. He has also produced two films: "In Smoke and Thunder: The Great War of the Californias" (2003), and "Dante's Inferno" (2007).

For the past 40 years, Paul Zaloom has performed at Kennedy Center, Lincoln Center, the American Museum of Natural History, Spoleto Festival USA, Walker Arts Center, Smithsonian National Air & Space Museum, and many other venues on numerous tours of the United States and abroad.

In 2014, Paul Zaloom participated as a keynote speaker in a science event at the National Autonomous University of Mexico, reprising his role as Beakman and with the support of the voice actor Juan Alfonso Carralero (who used to dub his voice into Spanish in the program), for a huge audience. Two years later, Zaloom attended the 35th International Book Fair at the National Polytechnic Institute.