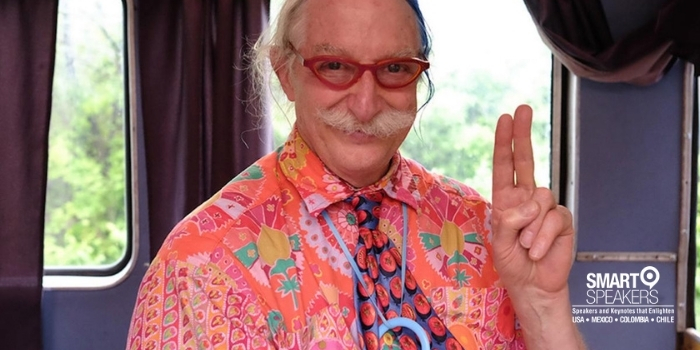 The inspiration behind the Hollywood hit of the same name, Patch Adams M.D. is known all around the world as a healthcare professional, social activist and hilarious entertainer.

The real-life inspiration behind the massive Hollywood hit of the same name, Patch Adams M.D. is known all around the world as a healthcare professional, social activist and hilarious entertainer. For more than four decades Adams has been promoting his philosophy that the best healthcare needs laughter, joy and creativity to be an integral element for successful healing.

Patch Adams has a vision of a healthcare system in which patients get all the time they need from their doctors and the two interact on a basis of mutual trust. He believes that conventional and alternative therapies should be blended into one holistic healing process, delivered with joy. This philosophy is delivered with resounding success at the Gesundheit Institute in West Virginia, and Adams aims to see it rolled out across the USA and around the world.

The success of the Gesundheit Institute has led to plans for a model healthcare facility to be built on a 310 acre site in Pocahontas County, West Virginia. In recent years, Patch Adams has temporarily stopped practicing medicine in order to raise funds for this revolutionary project, which will include a 40 bed hospital, theater, arts and crafts shops, horticultural projects and vocational therapy. Five million dollars are needed to fulfill this dream; by inviting Adams to speak you are not only guaranteed a hilarious and thought-provoking evening but you are also investing in one of the most exciting healthcare projects in the world.

For 37 years Patch Adams has been lecturing and performing 200 – 300 days of the year. Throughout the world in 68 countries, giving 50 separate presentations. He has lectured at 90 Medical Schools in the United States and in Universities and Medical Schools in over 60 countries.

Patch Adams  has 2 books published: Gesundheit and House Calls. Both have been translated into 14 languages.

Living A Life of Joy

Patch discusses how to discover the incredible thrill of choosing to live everyday with joy. The focus of this lecture/workshop is life as a choice.

The Joy of Caring

The focus of this lecture/workshop is the magic and power of care, not only in the patient’s life but also in the caregiver’s life.

In this funny and inspirational lecture Patch discusses his 30+ years of clowning experience. When Patch and Susan are hired as a team, they teach the audience performance and perform a wonderful clown stage show.

What Is Your Love Strategy?

Patch provides insights into the need for such a strategy and also takes a close look at the conception of “love” and the theory of “strategy”.

Patch explores what constitutes a healthy community, how one is created, maintained and what the responsibilities are of its members.

Medicine For Fun, Not Funds

Patch introduces Gesundheit as an example of “medicine for fun, not funds” and helps the audience design, explore and implement their own dreams. 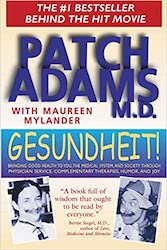 Gesundheit!: Bringing Good Health to You, the Medical System, and Society through Physician Service, Complementary Therapies, Humor, and Joy

Meet Patch Adams, M.D., a social revolutionary who has devoted his career to giving away health care. Adams is the founder of the Gesundheit Institute, a home-based medical practice that has treated more than 15,000 people for free, and that is now building a full-scale hospital that will be open to anyone in the world free of charge. 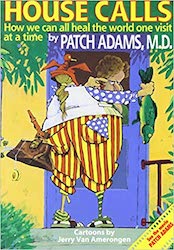 House Calls: How We Can All Heal the World One Visit at a Time

House Calls is a reminder that some of the most important factors in healing are not high-tech marvels but ordinary factors such as love, compassion, friendship, and hope. This book will lighten anyone's heart and assist him or her on a healing journey