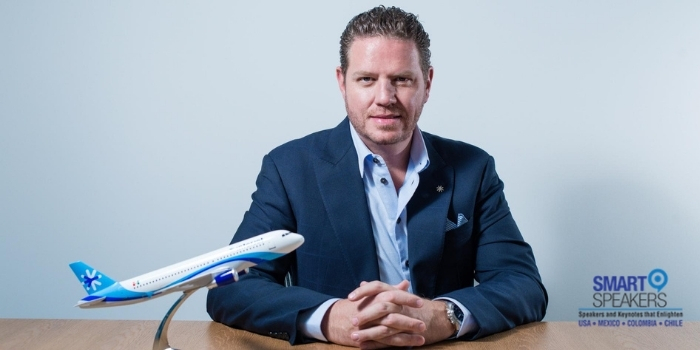 William Shaw is the founder of VivaColombia, Colombia's first low-cost airline. It was his master's project at Stanford University Graduate School of Business, and it materialized in May 2012.

William Shaw joined Interjet in 2019 as Managing Director and has more than 26 years of experience in the industry. Thanks to his entrepreneurial spirit, he successfully founded two low-cost policies in Latin America, VivaColombia and Viva Air Perú, and collaborated in the founding of a third in the Dominican Republic: Flycana.

As part of his graduate project at Stanford, William Shaw built the idea of a low-cost airline in Colombia as an alternative in which passengers only paid for what they really needed, without extra surcharges. Managing some seed capital and with the backing of an investment fund, he founded the VivaColombia airline in 2009, which began operating from Rionegro (Antioquia) in 2012. Today it has 20 national and 6 international routes and has served more than 2.2 million passengers in 2015 to date. Shaw is part of the new venture called VivaLatinoamérica.

William Shaw holds a Master’s degree from the Stanford University Graduate School of Business and studied management at the Anahuac University in Mexico, the Oxford Brookes University in the United Kingdom, and the College for Advanced Studies in Administration (CESA) in Colombia, where he graduated in 2004.  Shaw was a professor at CESA, where he received recognition from his students as one of the best teachers for three consecutive semesters. Shaw is a member of the board of directors of ProColombia, Green Africa Airways and a private equity investment fund.