Simon Cohen is a successful entrepreneur who has grown his company, Henco Global, while promoting the development of his employees. Harvard University uses his story as a case study to teach its organizational culture of excellence.

Simón Cohen started his career in the world of Logistics 20 years ago. He graduated from Tecnológico de Monterrey as a Bachelor of International Commerce (May 1996) and started his career as International Project Manager in the family textile company. During this position, Cohen realized the lack of quality service in forwarding companies in Mexico, which led him in 1997 to found his own company for the logistics coordination of international cargo transportation, which later would become Henco Global SA de CV.

Thanks to his strategic ability and incessant spirit of continuous improvement, Simón Cohen managed to position Henco as one of the most prestigious freight forwarders in the market, being highly recognized by its customers and suppliers. Among these industry recognitions is the one provided by the Lázaro Cárdenas Container Port Terminal in September 2016, who named Henco the Logistics Operator with the Largest Volume in Mexico. Henco is currently considered by the Great Place to Work Institute as the Best Logistics Company to Work for in Mexico for seven consecutive years, not only because of its trajectory, but also because of the respect and concern of its leader towards its people.

Given his vast experience in logistics and continuous preparation in prestigious institutions such as Harvard Business School and the Adizes Institute, Simón Cohen has been a speaker in multiple forums and workshops at renowned universities both in Mexico and abroad (ITESM, LBS, MIT, Harvard, USC, etc). In 2010, London Business School recognized him as an outstanding businessman, carrying out a case study on his strategic ability in business, which has been reflected in Henco’s performance throughout its history; Cohen's case is currently part of the master's degree program at this important University, considered by the Financial Times as one of the best in the world for its MBA.

Simón Cohen is currently a partner and adviser to different companies at a national and international level. His constant achievements have earned him the nomination by Ernst & Young as Entrepreneur of the Year 2013 and 2014. Likewise, Cohen is considered by the media as a connoisseur of the world of logistics which has allowed him to contribute to prestigious international magazines and newspapers such as The Times, Washington Times, Fortune Magazine, Leader to Leader Journal and INC Magazine. 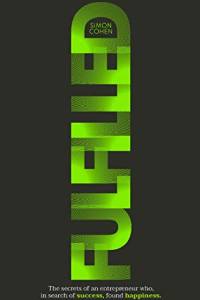 FULFILLED is the narration of the author’s experiences based on a key circumstance: the moment in which he felt death up close. Based on this, the author follows the path by which he developed his High Performance, Happy People philosophy and exposes the reasons why it is very important to give priority to three main pillars: