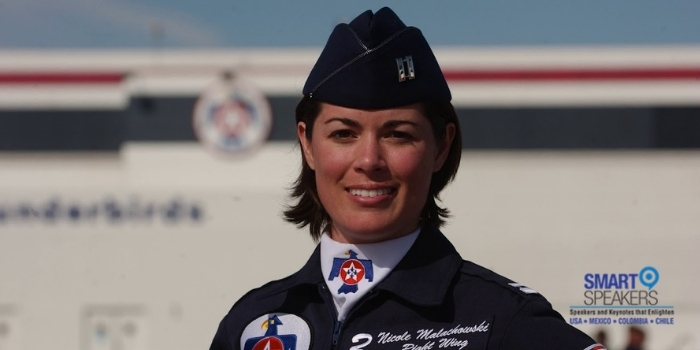 Colonel Nicole Malachowski is the first female pilot of the famed Thunderbirds of the US Air Force, squadron commander, war veteran in Iraq and adviser to the White House.

Nicole Malachowski had the honor of serving in several special duty assignments. In 2005, she was selected to fly as Thunderbird #3 with the USAF Air Demonstration Squadron and was the first woman to fly on any Department of Defense military jet demonstration team.

As a White House Fellow, Nicole Malachowski served on the Presidential Transition Support Team (PTST) while assigned to the U.S. General Services Administration. She served two high-level staff assignments in the Office of the Secretary of Defense (OSD P&R) as well as the Secretary of the Air Force Office of International Affairs (SAF/IA). During her last official assignment, Colonel Malachowski served as the Executive Director of the White House’s national ‘Joining Forces’ program. In this capacity, she directly advised former First Lady of the United States, Mrs. Michelle Obama, and Dr. Jill Biden on all topics relating to service members, veterans, and military families.

Nicole Malachowski’s successful military career ended prematurely, as she was medically retired from service due to the impact of late stage, neurological, Tick Borne Illness. As a newly minted Wounded Warrior in the Air Force Wounded Warrior Program, she relishes any opportunity to talk about her medical journey and gains energy from educating others about the growing Tick Borne Illness epidemic.

Upon her medical retirement, Nicole Malachowski voluntarily authored recommendations to the Chief of Staff of the Air Force on how to improve the support of the Air Force’s wounded, ill, and injured, specifically those patients enduring complex and chronic illnesses. Colonel Malachowski currently serves as an Advisory Board Member to The Dean Center for Tick Borne Illness at Spaulding Rehabilitation Hospital, a Harvard teaching hospital, in Boston, Massachusetts.

Nicole Malachowski has been recognized with several honors for her consistent contributions to community service, which include a Nevada State Assembly Resolution and induction into the “Women in Aviation International Pioneer Hall of Fame.” Dedicated to mentoring the next generation of Americans, she is a frequent motivational speaker at local, state, and national events.

Headwinds are the perfect metaphor for the change impacting organizations.

Being the best when it counts. What does it take to be the best?