Keving Harrington is a visionary entrepreneur and the creator of the popular infomercial “As Seen on TV”. Harrington has successfully launched over 20 businesses with sales of over 100 million each. He has been named one of the best entrepreneurs of our time by Entrepreneur Magazine.

Kevin Harrington has been a successful entrepreneur for over 40 years. He’s an original “Shark” on the Emmy-winning TV show, Shark Tank, the Inventor of the Infomercial, As Seen On TV Pioneer, Co-Founder of the Electronic Retailers Association (ERA) and Co-Founding board member of the Entrepreneurs’ Organization (EO). He got his start as a young entrepreneur in the early 80s when he invested $25,000 and launched Quantum International. This turned into a $500 million/year business on the New York Stock Exchange and drove the stock price from $1 to $20 per share.

After selling his interest in Quantum International, Kevin Harrington formed a joint venture with the Home Shopping Network, called HSN Direct, which grew to hundreds of millions of dollars in sales. Entrepreneur Magazine has called him one of the top Entrepreneurs of our time. He has launched over 20 businesses that have grown to over $100 million in sales each. He’s been involved in more than a dozen public companies, and has launched over 500 products generating more than $5 billion in sales worldwide with iconic brands and celebrities. Harrington has extensive experience in business all over the world, opening distribution outlets in over 100 countries worldwide. His success led Mark Burnett hand-picking him to become an Original Shark on Shark Tank where he filmed over 175 segments.

On the other hand, Kevin Harrington is also the founder of the Secrets of Closing the Sale Master Class inspired by the Master of Sales—Zig Ziglar. He’s the author of several bestselling books including Act Now: How I Turn Ideas into Million Dollar Products, Key Person of Influence, and Put a Shark in Your Tank. 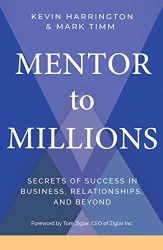 Mentor to Millions charts Mark's journey from that pivotal moment to a whole new understanding of how work, life, and relationships can coexist and thrive together. His guide through this journey: his accomplished mentor, Kevin Harrington, one of the original "sharks" from Shark Tank, who shares amazing stories and imparts invaluable wisdom about how to win in business and in every area of life. 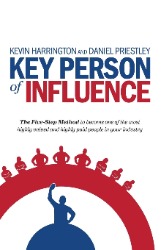 Many people think it takes decades of hard work, academic qualifications and a generous measure of good luck to become a Key Person of Influence. This book shows that there is a strategy for fast-tracking your way to the inner circle of the industry you love.

What’s your story? Kevin shows you how to own your niche—and stand out from the competition.

Young entrepreneurs get a chance to swim with the sharks and survive with Kevin as mentor.

Future of Marketing and Branding

A marketing guru for 30 years, Kevin spots trends and technologies to help you stay on top.

Lone “sharks” never win. The best surround themselves with the best. Let Kevin show you how to find and build a dream team.

Kevin knows what works and what doesn’t and shows you 7 sure-fire ways to beat the system.

Get thrown to the sharks, see if you swim. Kevin shows you how to craft the perfect pitch.

Kevin gives you proven tools and systems to preemptively vet your venture.

Discover Kevin’s secrets and creative solutions to financing your dream.

Innovation is everyone’s job. Let Kevin empower the intrapreneurial spirit in your team.