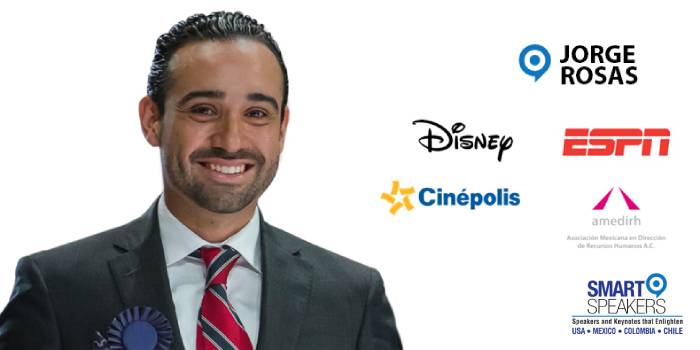 Former Global Director of Diversity, Inclusion and Wellbeing for Disney-ESPN, Jorge Rosas is an international speaker who is an expert in human capital, talent, leadership, culture and happiness at work.

Jorge Rosas is an Attorney-at-Law who focused his practice in the HR function, he studied at Escuela Libre de Derecho, the most prestigious law school in México. From the professional perspective, he served as Partner in the labor department of Baker & McKenzie, the largest law firm in the world, in which he worked for 11 years and earned several distinctions. As partner of the firm he was responsible to coordinate the LATAM Labor Practice Group.

He also served as Regional Director of Human Resources at Allergan, a pharmaceutical company owner of Botox patent, with operations in more than 80 countries. Under this capacity, Jorge Rosas was responsible of all HR matters in Latin America, in countries such as Argentina, Brazil, Colombia, Venezuela, Chile and Mexico.

He served during almost five years as the Chief Human Resources Officer of Cinépolis. He was responsible of all HR, Transformation and Labor matters worldwid, serving more than 38,500 employees, leading a team of more than 500 HR professionals. Jorge Rosas’ strategy had three components: Talent, Leadership & Culture. In the 2015 International Convention of the company, he obtained the “2013-2014 Best Director Award”, recognition granted to the Best Director in both Corporate & International matters during the last two years.

In March 2017 Jorge Rosas joined THE WALT DISNEY COMPANY / ESPN to serve as Diversity, Inclusion & Wellness HR Sr Director, a position based in NYC. Under this capacity, Jorge is responsible for all Diversity, Inclusion and Wellness matters globally, to help the company creating an inclusive and diverse environment in which everyone contributes with their potential. Under this role, he conducted a global assessment of the different dimensions of diversity relevant for each region, created the Global Dashboard and Metrics System (GDMS) and the D&I Action Plans that were approved by the General Managers to be implemented in each of the international operations. He is also responsible to lead the Wellness team of the company, and to re-design the Wellness strategy, focusing on three main attributes: Presence (Mindfulness), Activity & Good Eating.