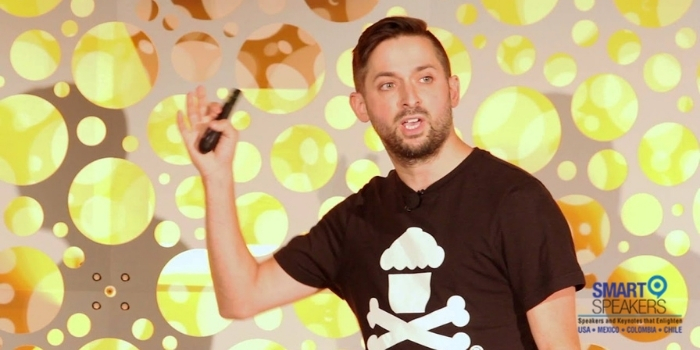 Johnny 'Cupcakes' Earle is an ingenious and unique young businessman, named the # 1 Entrepreneur in America by BusinessWeek magazine.

Entrepreneur Johnny 'Cupcakes' Earle is the founder of the cult retail sensation “Johnny Cupcakes,” a limited edition T-shirt company that operates under a bakery narrative. The brand has attracted thousands of loyal customers and millions of dollars in merchandise sold without ever spending a dime on advertising due to the memorable “experience” Johnny’s crafted. All purchases come in pastry box packaging complete with a story and sometimes hidden messages or gifts.

Johnny 'Cupcakes' Earle is constantly creating new experiences for his customers, whether he’s traveling across the country to host “pop-up stores” and sell his original T-shirts out of a suitcase or treating 300 of his customers dressed in their Johnny Cupcakes T-shirts to dessert at a Los Angeles ice cream parlor via a spontaneous invitation on Twitter. He is a popular speaker at university and business events.

If you dream of inspiring cult-like brand loyalty—the kind that involves mile-long queues and even permanent tattoos—Johnny Cupcakes is for you. The founder of the world-renowned tee-shirt brand Johnny Cupcakes, Johnny’s known for helping other people create blueprints for building brand loyalty, creating memorable experiences, and inspiring innovation.

With global store openings, thousands of customers with his logo tattooed on themselves, people who camp out for his products, and high-profile collaborations with giants such as The Simpsons, Power Rangers, and Nickelodeon, Johnny 'Cupcakes' Earle was named America’s #1 Young Entrepreneur by BusinessWeek, Top Innovator in Retail by The Boston Globe, and featured in INC magazine as the CEO of one of the world’s fastest growing independent businesses.

Despite being in one of the most difficult product categories to stand-out in, and a founder of a brand when he was just 19 years old, Johnny’s solution to his business challenges was to create such a unique brand experience that his customers would loyally line-up around the block, time and time again, just to be able to sport his logo on their clothing.

Since then, through his talks and creative consulting, Johnny 'Cupcakes' Earle has shared his strategies with clients that include Apple, L’Oreal, Disney, IBM, Audi, Harvard University, Wieden+Kennedy, Marriott, and P&G.Also a TEDx speaker, Johnny has been featured in media such as MTV, NPR, Forbes, WIRED, Newsweek, and as a case study in several branding and business books.

In this awe-inducing presentation Johnny will educate you on how you too can create a wave of loyalty and obsession around your products, your business and within your teams through the power of social media & experiential branding.

In this dynamic presentation he will inspire leaders to create a culture of ‘brand obsessives’, team members who will shout about the company values and engage with the brand on a deep level; resulting in loyal teams and bowled- over customers.

Johnny will talk leaders, entrepreneurs, marketers, and sales teams through the lessons he has learned on his journey to global domination – and arm them with easy to apply strategies for making their dreams a reality. Johnny shares dozens of ingredients to success, including the power of details, collaboration, and the art of rolling with the punches while learning to adapt.

Starting A Business in 2019? Unorthodox Marketing Techniques by Johnny Cupcakes