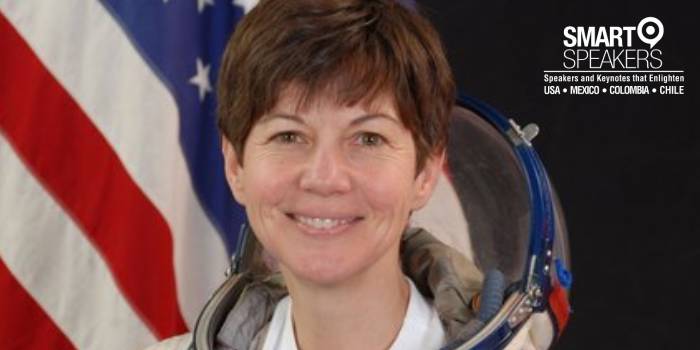 Catherine 'Cady' Coleman is a daring NASA astronaut who prepared actress Sandra Bullock for her lead role in the film Gravity, for which she was nominated for an Oscar for Best Actress in 2014.

Catherine Coleman is an American scientist and NASA Astronaut. She has traveled three times in space, twice aboard the space shuttle Columbia. As part of a mission in 2010, Coleman spent six months aboard the International Space Station, where she worked as a Chief of Robotics and as Chief Scientist.

In addition to her scientific and aeronautical career, Catherine Coleman has a musical background. As a flutist, she played live from orbit on national public radio in 2011 in honor of the 50th anniversary of Yuri Gagarin's first space flight. She has also served as inspiration in the cinematographic world, training actress Sandra Bullock in her preparation for the role of astronaut Ryan Stone in the Oscar-winning film Gravity.

Catherine Coleman joined NASA's Astronaut Corps in 1992 and holds a Bachelor's Degree in Chemistry from the Massachusetts Institute of Technology (MIT) and a PhD in Polymer Science and Engineering from the University of Massachusetts Amherst. After completing her education, she joined the U.S. Air Force, where she became a colonel, retiring in 2009. In 2016, Catherine left NASA after a 24-year career.

In her conferences, she talks about her incredible stay in space, drawing valuable lessons from teamwork and leadership. Through images and videos of her space trip, Catherine emphasizes the importance of working together to achieve a common goal, which she illustrates through living with her crew. Catherine believes that this teamwork can be generalized to all facets of society, which she calls the Earth crew.

Astronaut at a Glance: Catherine Coleman