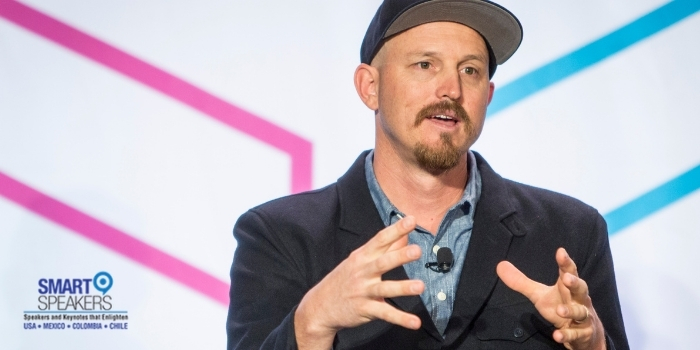 Mick Ebeling is a creative visionary, producer, philanthropist, technology trailblazer, author, entrepreneur and public speaker. He is the founder and CEO of Not Impossible, an organization that develops creative solutions for today’s problems.

Mick Ebeling is a film, television and commercial producer, philanthropist, technology trailblazer, author, entrepreneur and public speaker. Ebeling is CEO of Not Impossible, an organization that develops creative solutions to address real-world problems. He’s been named by Fortune Magazine as one of the Top 50 World’s Greatest Leaders, is a recipient of the Muhammad Ali Humanitarian of the Year Award and is listed as one of the world's most influential creative people by The Creativity 50’s.

Not Impossible Labs was founded on Mick Ebeling’s firm belief that nothing is impossible. With no technical background in ocular recognition technology, Ebeling created Not Impossible’s first project: The Eyewriter. An open source, low-cost, DIY device, The Eyewriter enables individuals with paralysis to communicate and create art using only the movement of their eyes. TIME Magazine named The Eyewriter one of the “Top 50 Inventions of 2010,” and the device is now part of MoMA’s permanent collection.

Not Impossible’s latest endeavor, Project Daniel, enabled Mick Ebeling to fly to Sudan to 3D-print prosthetic limbs and fit them for children of the war-torn region. He then left the equipment behind with trained locals to continue his work, thus creating the world’s first 3D printing prosthetic lab and training facility. Arms are printed within hours and cost $100.

Project Daniel earned many awards, including the Titanium Cannes Lion, along with 3 Bronze Lions (Branded Content, Film, & Cyber), and 1 Gold (Product Design). Project Daniel has also won AICP’s Next Cause Marketing Award, the 2014 One Show Gold Pencil (Design and Intellectual Property & Products, tied for “Best in Show”), the 2014 Silver and Bronze Telly Award, and the 2014 Maker Faire Editor’s Choice Blue Ribbon (Creativity, Ingenuity and Innovation), and was among The Nominet Trust 100, and was nominated at the 2015 SXSW Interactive Innovation Awards (Innovative 3-DIY).

On January 6, 2015 Mick Ebeling’s first book, Not Impossible: The Art and Joy of Doing What Couldn’t Be Done, hit shelves. The book recounts his life experiences, The Eyewriter, and Project Daniel.

In this talk, Mick discusses the tools necessary to become a stellar collaborator, and to recognize the traits of collaboration-worthy individuals for your next big idea.

Making The Next Industrial Revolution

Mick outlines the contributing factors that make this the most exciting time in modern history and how to capitalize on it for social and business good.

Mick shatters the myths about what it takes to make a great innovator and provides useful techniques and solutions for teaching the art of innovation to improve your career and your life.

Open Source for the Classroom

If we can teach our children to innovate and the skills and process of innovation, we can give them the tools they need to achieve great things. How can we build curricula that stimulate today’s bright young minds? Answer: supplement the learning experience with open source ideas and technology.

What it Means to be a Maker

In this presentation, Mick discusses the five core traits that make a Maker and how to develop those traits in yourself.

The goal of this talk is to inspire participants to create change and solutions within their own classrooms and communities by learning how to be part of the open source community.

The Fallacy of “Impossible”

In this talk, Mick dives deeper into “Impossible,” the underlying psychological effects it has on an organization, and how to overcome “Impossible” so true innovation can take place.

Not Impossible: The Art and Joy of Doing What Couldn't Be Done

Fascinating, inspiring, and bursting with optimism and new ideas, Not Impossible is a true testament to the power of determination. It will motivate you to accept the idea that all problems can be solved—and that you have the ability to change the world and make miracles happen.

Mick Ebelling: “Not Impossible: The Art and Joy of Doing What Couldn’t Be Done” | Talks at Google

Can And Will 5x15: Mick Ebeling