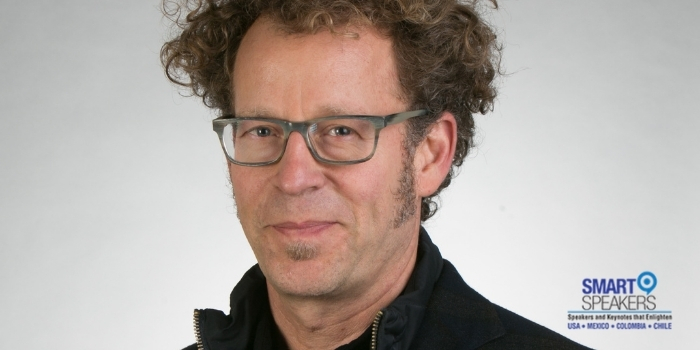 Ken Goldberg is an award winning pioneer in robotics and artificial intelligence. He’s also an Engineering professor at UC Berkeley and a popular keynote speaker.

Award winning Roboticist, Filmmaker, and UC Berkeley Engineering Professor Ken Goldberg is a popular public speaker who combines compelling images and videos in dynamic presentations on emerging Artificial Intelligence and Robotics technologies, sharing insights about what isn’t new, what is new, and how we can prepare for the future.

Ken Goldberg trains the next generation of researchers and entrepreneurs in his research lab at UC Berkeley; he has published over 200 papers in robotics and social media and holds 8 US Patents. He is a pioneer in technology and visual expression, bridging the “Two Cultures” of Art and Science. With unique skills in creative problem solving, invention, and thinking on the edge, Goldberg has presented over 400 keynote and invited lectures to audiences around the world at events such as the World Economic Forum, Aspen Ideas Festival, Google Zeitgeist, TEDx, Web 2.0, SXSW, and at Google, General Electric, Intel, Cisco, Fujitsu, Siemens, Autodesk, Samsung, Tata, Vodefone, Deutsche Telekom, Fidelity, and Flextronics on topics such as the five listed below.

Ken Goldberg and his graduate students pioneer research in optimal robot grasping, motion, and design for applications ranging from surgery to manufacturing to precision agriculture to social media. His artwork has appeared in 70 exhibits including the Whitney Biennial and he developed the first provably complete algorithm for part feeding and the first robot on the Internet. Goldberg served as Editor-in-Chief of the IEEE Transactions on Automation Science and Engineering (T-ASE), Co-Founder of: the Berkeley Center for New Media (BCNM), Hybrid Wisdom Labs, the Moxie Film Studio, the African Robotics Network (AFRON), and Founding Director of UC Berkeley's Art, Technology, and Culture Lecture Series. His projects are regularly featured on television, radio, and in publications such as the New York Times, The Atlantic, and der Spiegel.

Ken Goldberg was awarded the NSF Presidential Faculty Fellowship from President Bill Clinton in 1995 and elected IEEE Fellow in 2005.

With unique skills in creative problem solving, invention, and thinking on the edge, Ken Goldberg has engaged audiences around the world in over 400 keynotes. 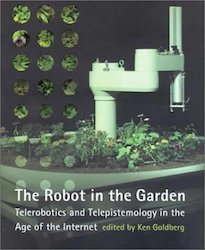 The Robot in the Garden: Telerobotics and Telepistemology in the Age of the Internet

The Robot in the Garden initiates a critical theory of telerobotics and introduces telepistemology, the study of knowledge acquired at a distance.