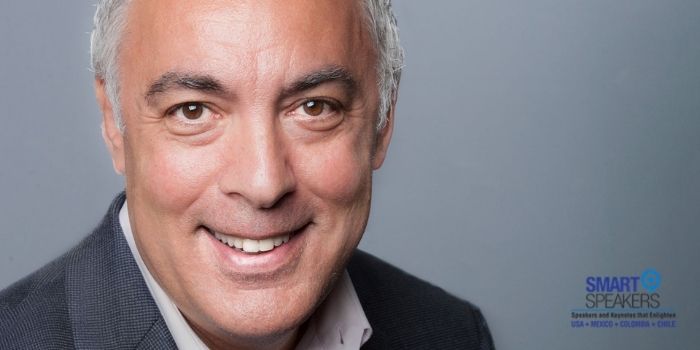 Andrew Rasiej is a futurist, speaker and civic and social entrepreneur. Rasiej is the founder of Personal Democracy Media, an organization doing work on how the intersection of technology, politics and civil society is empowering new levels of citizen engagement.

Andrew Rasiej is a civic and social entrepreneur, technology strategist, and Founder of Civic Hall, a collaborative work center and event space currently located in the Flatiron district of Manhattan supporting a growing community of people and organizations building technology solutions for the public good. Rasiej has counseled political leaders, senior government officials, not for profit and foundation heads, and academics in the United States and abroad on issues related to civic engagement, technology, transparency, digital diplomacy and campaign strategy.

Andrew Rasiej’s commitment to finding and promoting digital solutions for a more open and accountable government extended to his former role as the senior technology advisor to the Sunlight Foundation, a nonprofit, nonpartisan organization founded in 2006, which works to use the power of technology and citizen use of the internet to promote greater government transparency and accountability.

Andrew Rasiej’s belief that technology could empower citizen engagement originally took hold in 1997 when he founded MOUSE.org (Making Opportunities for Upgrading Schools and Education), a nonprofit helping under-served public school students to become technology leaders in their schools. To date over 50,000 students have benefited from the MOUSE program nationally and it continues to expand in the United States and the rest of the world.

In the wake of the September 11 tragedy, Andrew Rasiej mobilized dozens of volunteers to aid in relief and recovery efforts and subsequently proposed creating a national emergency technology corps to be organized for future natural disasters or terrorist attacks. After his lobbying, and with the help of Senator Ron Wyden, Congress voted 97-0 to create the National Emergency Technology Guard (NET Guard) in 2002, which was later incorporated into the law creating the Department of Homeland Security. The program is now part of FEMA and is known as Tech Corps.

In 2010 Andrew Rasiej was named chairman of the New York Tech MeetUp, now the NY Tech Alliance, an organization comprising more than 63,000 entrepreneurs, technologists, venture capitalists, and other professionals working in and around the tech ecosystem of New York City.