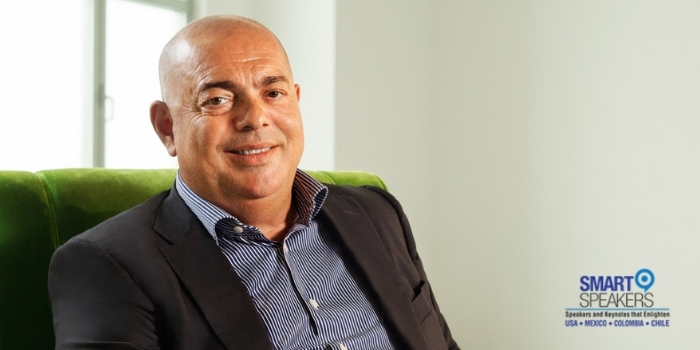 Vito Di Bari is one of the three greatest futurists in the World. He is hailed as the "new European guru of innovation" by the New York Times and as the "great engineering dream-maker" by Economics Nobel Prize laureate Kenneth Arrow.

Vito Di Bari maintains a global reputation of excellence as the world's premiere futurist, innovation strategist and inspirational keynote speaker. Di Bari is the only keynote speaker who has given a TEDx Talk in five world continents. He is an esteemed former professor of Project Design and Management of Innovation at both the Polytechnic University and Bocconi University in Milan. He has also served as Executive Director for the IMI Institute of UNESCO in Paris.

In 2001, Vito Di Bari secured his visions and legacy by founding Next Media Lab, a cutting edge international research laboratory, named "Milan's think tank" by Wired Magazine, where he currently serves as CEO. After moving to Miami Beach, Di Bari founded Di Bari & Associates, a design studio that is changing the world a neighborhood at a time through his cutting edge artistic iconic urban installations using recent discoveries in various fields such as AR, sensors and 3D printing.

A recognized author on innovative theories, Vito Di Bari has published a multitude of works including the books: Social Killer, Short Circuit, Web 2.0, The Future is Already Here (but we don’t know it yet), 2015, Weekend in the Future, Strategies for the Next Economy, The Digital Economy Encyclopedia, Key Words for the Net Economy, and Multimedia Management. In addition to his books, Di Bari is a contributing writer for various magazines including WIRED, Harvard Business Review, Panorama (Italy) and Il Sole 24 Ore (Italy). He has also appeared as a host for television’s Discovery Channel and the Italian broadcasting network Italia 1.

Leading The Transformation - The World In 2025

How to win the business competition in the age of Digital Transformation, IoT, ubiquitous Cloud, Artificial Intelligence, cooperative Robots and Smart City.

A Journey Into The Future Of Marketing

Welcome To The Connected World Of The Future

A Journey Into The Future Of Transportation

Welcome To The Future Of Healthcare

Welcome To The Future Of Shopping

How To Win The Competition In The Post-branding Age

How to win the competition when all the old rules of Travels, Leisure and Hospitality have been broken
Next-Gen Hotels - Immersive Experience - Booking to CRM - Technology Trends - Destination Hotels