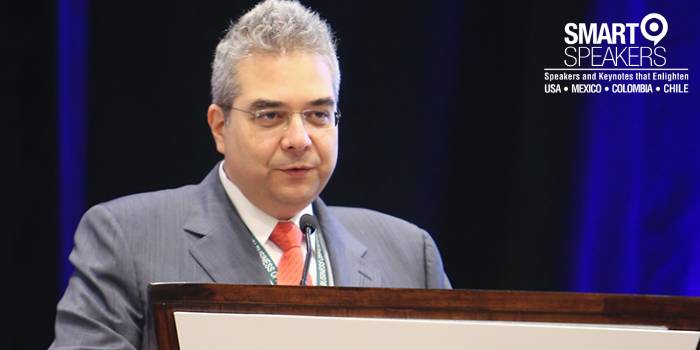 John Sfakianakis is Director of Economics Research at the Gulf Research Center in Riyadh. He is an expert on the future of oil and oil policy, the regional economy, privatisation, fiscal and debt management.

John Sfakianakis advises global corporations on the future of oil and oil policy, the regional economy, privatisation, fiscal management, macro fiscal planning and debt management. He is Director of Economics Research at the Gulf Research Center in Riyadh. Previously he was Middle East Director of the Ashmore Group in Riyadh.

His other former positions have included chief investment strategist, MASIC, a family-owned investment company; chief economic adviser to the Saudi Ministry of Finance; group general manager and chief economist, Middle East North Africa region for Credit Agricole C.I.B.; chief economist, Saudi British Bank (SABB/HSBC); and chief regional economist, Samba Financial Group. John Sfakianakis also has served as adviser at the Ministry of Economy and Planning in Saudi Arabia and as economist at the United Nations (UNDP) and the World Bank. He holds a PhD in Economics from Harvard University.

John Sfakianakis has also worked for the United Nations (UNDP) and the World Bank as an economist in Washington, D.C. His articles appear frequently in the Financial Times, New York Times, Wall Street Journal and Bloomberg. He holds a Ph.D. in economics from Harvard University.

Dr. John Sfakianakis participation about the latest developments between the U S and Iran