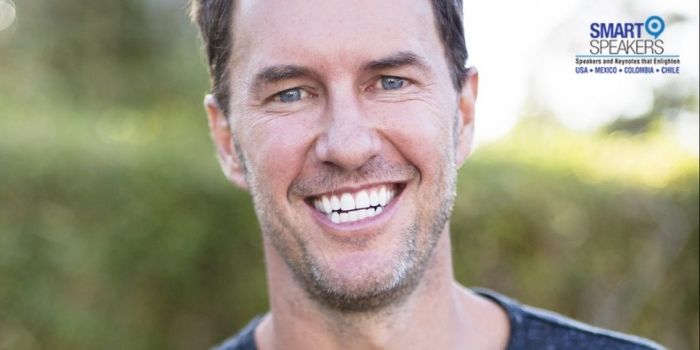 Blake Mycoskie is the legend behind the TOMS brand and the One for One campaign. An enthusiastic public speaker and social entrepreneur, Mycoskie has donated millions of shoes to underprivileged children.

Blake Mycoskie is the Founder of TOMS and the brains behind the brands’ One for One model, which rewrote the rules of for-profits and philanthropy and has allowed the company to partner with countless organizations such as UNICEF. As a social entrepreneur and enthusiastic speaker, Mycoskie shows that using business to improve lives is the number one competitive advantage in today’s markets. His book, Start Something That Matters, became a New York Times best-seller. Blake also founded the Social Entrepreneurship Fund, which invests in innovative and socially-conscious companies that exist to create change.

The idea for a for-profit business with giving at its core came from a trip to Argentina in 2006, where Blake Mycoskie saw the hardships faced by children without shoes, from a lack of basic protection to the inability to attend school. Later, Mycoskie would extend TOMS One for One model to address other vital needs, such as eye care and safe water, which was achieved through TOMS eyewear and coffee sales.

Since its launch, Blake Mycoskie and TOMS have partnered with countless organizations such as UNICEF, Save the Children, Partners in Health, The Red Cross, Everytown, Faith in Action, March for Our Lives, and others, and what started as a simple idea has grown into a global movement, impacting over 100 million lives to date.

In 2009, Blake Mycoskie and TOMS received the Secretary of State’s Award of Corporate Excellence (ACE). In 2014, Richard Branson asked Mycoskie to join The B Team, a group of worldwide leaders that support and promote a better way of doing business, advocating for the well-being of people and the planet. In 2015, Harvard’s School of Public Health accorded him its Next Generation Award, which honors individuals under 40 whose leadership and commitment to health as a human right inspires young people to make ‘health for all’ a global priority. In 2016, Mycoskie was awarded the Cannes Lion Heart Award, which honors a person or a company that has made a positive impact through the innovative use of brand power. Additionally, Blake Mycoskie and TOMS have been featured in several publications, including Inc., Time and Fortune.

In 2011, Blake Mycoskie’s book, Start Something That Matters, became a New York Times best-seller. Detailing his personal story, the book serves as a call to action for others to incorporate giving into business and, more broadly, to invest in their passions.

In 2015 Blake Mycoskie founded the Social Entrepreneurship Fund, which invests in innovative and socially-conscious companies that exist to create change. To date, the fund has invested in 15 for-profit companies in industries ranging from technology and education to food equality.

Blake Mycoskie has continued a lifelong journey of exploration and personal transformation, and in doing so realized there’s way more to life than just professional success. In his talk, Mycoskie brings to life the power behind making personal and professional success one and the same—that it's only through the pursuit of a vision greater than oneself that you can achieve transformative success.

Conscious Capitalism and the Future of Business

In this visionary talk, Blake Mycoskie shows you how to succeed in a new era of relentless competition and heightened social awareness. Why is philanthropy your best competitive advantage? How do you make money and do good simultaneously?

How do you turn ideas into great businesses? And how do you create businesses that people love, and love to talk about? In this keynote, serial entrepreneur Blake Mycoskie shares his secrets for starting, growing, and sustaining new businesses. Start Something That Matters

The incredible story of the man behind TOMS Shoes and One for One, the revolutionary business model that marries fun, profit, and social good. If you’re ready to make a difference in the world through your own start-up business, a nonprofit organization, or a new project that you create within your current job, or you want to love your work, work for what you love, and have a positive impact on the world, this book is for you.

Blake Mycoskie: How to do good AND make money (TOMS brand)

TOMS Founder on Being a Lifelong Seeker: Blake Mycoskie