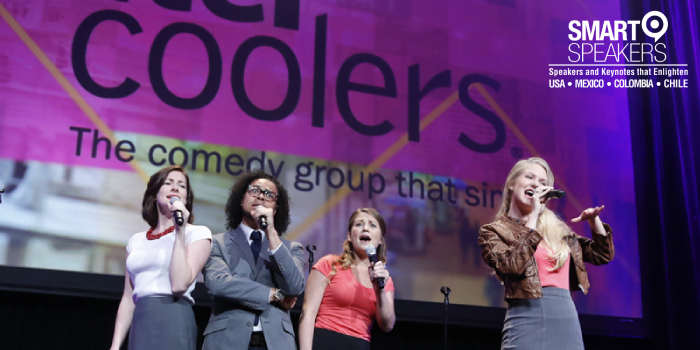 Once called a cross between The Office and the funniest YouTube parody video you ever saw, The Water Coolers is a singing comedy act that uses top NY talent to answer the question “does this stuff happen to anyone else?”

Conceived and created by Tom and Sally Allen to combine their skills, The Water Coolers made their New York club debut in 2000 and followed that two years later with a smash engagement Off-Broadway, produced by one of the producers of HAIRSPRAY, SPAMALOT, and THE PRODUCERS. The Water Coolers received two Spotlight Awards for Entertainment of the Year, making them one of only 3 acts to be awarded this honor twice. In addition to a packed special events schedule, they have toured their constantly updated act at performing arts centers around the U.S. and spots as far reaching as Singapore.

The Performing Cast is made up of NYC pros with resumes including top comedy clubs like Igby's, the Improv, the Comic Strip, and the Icehouse as well Broadway's hippest and hottest shows, including Gloria Estefan's "On Your Feet," "Dear Evan Hansen," “Wicked,” “Rock of Ages,” "Jersey Boys," Carole King's "Beautiful," “Chicago” “Hair”, “Pippin”, “In The Heights ,” and "The Boy from Oz," with Hugh Jackman.

The Water Coolers' Writing Team, led by Tom Allen, mixes professional comedy writers with people working in the "real world" to deliver an authentic and funny take on work.  Current contributors include a professional sales rep in Tampa, an investment banker from Dallas and a cadre of professional writers in NYC.

When you simply want your audience to laugh really hard and have a great time.

Keynote: Getting To Great Performance

For content to land, they have to really take it in and as sales legend Jeffrey Gitomer says, "The end of laughter is followed by the height of listening."

How do you get your participants focused and ready to go when they might have hit the lobby bar after last night's reception?

Awards shows should leave the winners feeling sky high, but unfortunately the actual business of giving awards can drag the pace to a crawl and leave participants wanting to stick a fork in their eyes. Ever been to one of those?

Sales meetings have one purpose: motivating future performance. One powerful way to achieve that is to show your team that you really get what they go through every day on the way to hitting the targets you set.

If you have specific messages that you have GOT to get across to your audience -- about your brand, your plan, your future -- call the police because The Water Coolers will kill it.