Johan Norberg is an expert lecturer, documentary filmmaker and the author of 'Progress: Ten Reasons to Look Forward to the Future' that was chosen as the Book of the Year by The Economist, Guardian and Observer.

Native of Sweden, Johan Norberg is a Senior Fellow at the Cato Institute in Washington D.C. and the European Centre for International Political Economy in Brussels. He is a frequent commentator in Swedish and international media. In 2018 he received the Walter Judd Freedom Award, previously awarded to luminaries such as Garry Kasparov and Ronald Reagan.

Johan Norberg regularly writes and hosts documentaries on development, economics and current affairs, in most cases for American television, including Overdose: The Next Financial Crisis, Power to the People, Free or Equal and Economic Freedom in Action: Changing Lives. His latest documentary is Sweden: Lessons for America? about how others can learn from the success and mistakes of his native country.

For his international work, Johan Norberg has received the Distinguished Sir Antony Fisher Memorial Award from the American Atlas Foundation, and the gold medal from the German Hayek Stiftung, that year shared with former British Prime Minister Margaret Thatcher.

He is a passionate, experienced and acclaimed speaker with engagements from Stockholm to Sydney, from Buenos Aires to Beijing and from Cairo to Capitol Hill on subjects like liberty, progress, entrepreneurship, global trends and globalization. Johan Norberg has been particularly celebrated for his ability to make complex ideas easily accessible and challenge his audience with truly sharp thinking for a rapidly changing world.

Progress: Ten Reasons to Look Forward to the Future 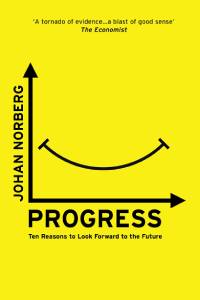 Our world seems to be collapsing. The daily news cycle reports the deterioration: divisive politics across the Western world, racism, poverty, war, inequality, hunger. While politicians, journalists and activists from all sides talk about the damage done, Johan Norberg offers an illuminating and heartening analysis of just how far we have come in tackling the greatest problems facing humanity. In the face of fear-mongering, darkness and division, the facts are unequivocal: the golden age is now.

Open: The Story Of Human Progress 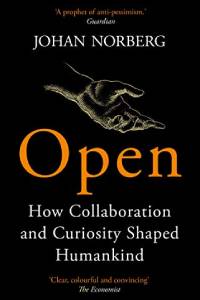 Humanity's embrace of openness is the key to our success. The freedom to explore and exchange - whether it's goods, ideas or people - has led to stunning achievements in science, technology and culture. As a result, we live at a time of unprecedented wealth and opportunity. So why are we so intent on ruining it?
From Stone Age hunter-gatherers to contemporary Chinese-American relations, Open explores how across time and cultures, we have struggled with a constant tension between our yearning for co-operation and our profound need for belonging. Providing a bold new framework for understanding human history, bestselling author and thinker Johan Norberg examines why we're often uncomfortable with openness - but also why it is essential for progress. Part sweeping history and part polemic, this urgent book makes a compelling case for why an open world with an open economy is worth fighting for more than ever.