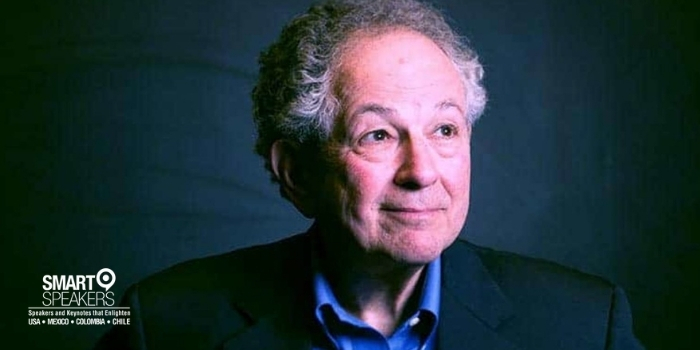 Jeffrey Garten was Undersecretary of Commerce for International Trade during the Clinton administration. He is a member of the board of important international financial companies.

Jeffrey Garten is dean emeritus at the Yale School of Management, where he teaches courses on the global economy and crisis management. He was dean of the school from 1995 – 2005 and has been teaching at the school since he stepped down. Prior to serving as dean, he was undersecretary of commerce for international trade, 1993-1995, where he focused on trade and investment policy towards big emerging markets—particularly China, India, and Brazil.

Before government service, Jeffrey Garten spent 13 years on Wall Street. As a managing director of Lehman Brothers, he specialized in debt restructuring in Latin America, built up Lehman’s investment banking business in Asia, and restructured some of the world’s largest shipping companies in Hong Kong. Later he worked on mergers and acquisitions for the Blackstone Group.

From 1997-2005, Jeffrey Garten wrote a monthly column for BusinessWeek on major challenges facing global business leaders. His articles have also appeared in the New York Times, the Wall Street Journal, the Financial Times, Foreign Affairs, Foreign Policy, and the Harvard Business Review. He is the author of A Cold Peace: America, Japan, Germany, and the Struggle for Supremacy; The Big Ten: Big Emerging Markets and How They Will Change Our Lives; The Mind of the CEO; The Politics of Fortune: A New Agenda for Business Leaders; and From Silk to Silicon: The Story of Globalization Through Ten Extraordinary Lives.

A graduate of Dartmouth College (BA, 1968) and Johns Hopkins University (PhD, 1980), from 1968-1972 Jeffrey Garten served as an officer in the 82nd Airborne, aide-de-camp to the commanding general of the Special Forces, and advisor to the Royal Thai Army.

From Silk to Silicon: The Story of Globalization Through Ten Extraordinary Lives

This is the first book to look at the history of globalization through the lens of individuals who did something transformative, as opposed to describing globalization through trends, policies, or particular industries. From Silk to Silicon tells the story of who these men and women were, what they did, how they did it and how their achievements continue to shape our world today. 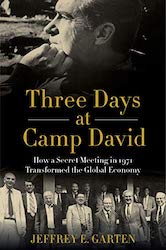 Three Days at Camp David: How a Secret Meeting in 1971 Transformed the Global Economy

Based on extensive historical research and interviews with several participants at Camp David, and informed by Garten’s own insights from positions in four presidential administrations and on Wall Street, Three Days at Camp David chronicles this critical turning point, analyzes its impact on the American economy and world markets, and explores its ramifications now and for the future. 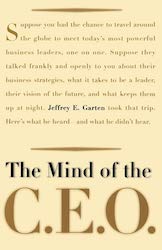 The Mind Of The CEO: The World's Business Leaders Talk About Leadership, Responsibility The Future Of The Corporation, And What Keeps Them Up At Night

The Mind of the CEO offers unprecedented access to the most dynamic business leaders of our time. Reading this book is like being at the World Economic Forum in Davos, Switzerland -- not at the formal presentations but in the hotel bar afterward, where the microphones are turned off and world-famous business leaders say what they really think. Better still, their confidant, Jeffrey Garten, interprets what they say, telling you how their views relate to each other and the world economy, and noting the many important things left unsaid.

Jeffrey E. Garten: Globalization and the Next Administration