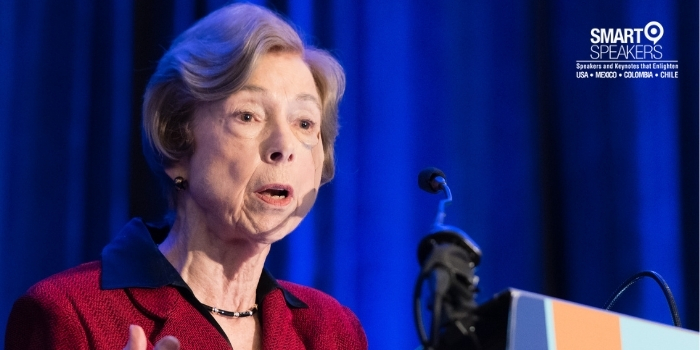 Carla Hills was the chief negotiator for the United States of the North American Free Trade Agreement, the historic agreement that united the economies and destinations of Mexico, the United States and Canada.

A two-time cabinet officer (third woman to hold a cabinet position), business executive, respected lawyer, and board member of numerous Fortune 500 companies, Ambassador Carla Hills is one of the world’s most influential voices on international trade, commerce, and investment.

Carla Hills served as the United States’ original NAFTA negotiator. She is widely recognized for her experience and relationships in China as Chair and CEO of Hills & Company International Consultants, a firm she founded in 1993 that is dedicated to helping companies overcome obstacles and achieve success in today’s globalized market. As U.S. trade representative from 1989 to 1993, Hills was President George H. W. Bush’s principal advisor on trade and investment policy and the nation’s chief trade negotiator, representing American interests on a wide range of bilateral and multilateral negotiations.

Carla Hills has served on the boards of AIG, AT&T, Chevron, Gilead Sciences, IBM, Time Warner, and United Airlines, among others. Hills is a member of the JP Morgan International Council. In addition, she chairs the National Committee on U.S.-China Relations, co-chairs the Inter-American Dialogue, and serves as Chair Emeritus of the Council on Foreign Relations after serving as its co-chair until July 2017.

An advocate for open global markets and expanded commerce, Carla Hills has earned a reputation for achieving positive solutions to international commercial issues, as a trusted bipartisan adviser to Presidents and CEOs, and an effective advocate on behalf of leading U.S. companies. Earlier in her career, she served in President Ford’s cabinet as Secretary of Housing and Urban Development. An expert on antitrust and federal law practice, Hills also served as Assistant Attorney General of the Department of Justice’s Civil Division and as a co-founder and partner in the well-regarded national law firm now known as Munger, Tolles & Olson LLP.