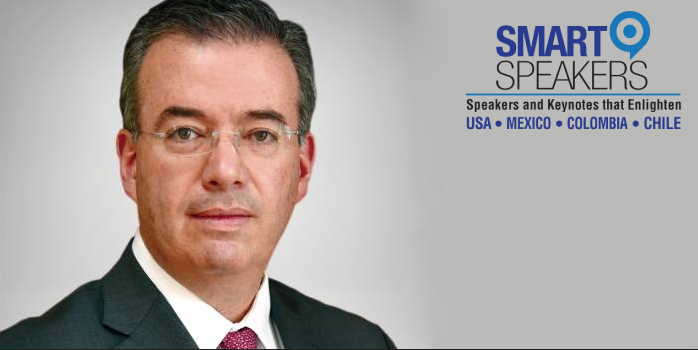 He was Governor of Banco de México (2017-2021), whose leadership contributed to enable monetary policy maintain inflation low and stable and to safeguard the well-functioning of both financial and payment systems, in a context of external and domestic shocks. He was named Governor of the year by Central Banking (2021), Central Banker of the Year for the Americas by The Banker (2019), and Central Banker of the Year by Latin Finance (2018 and 2019).

Alejandro Díaz de León was Governor of Banco de México (December 2017 to 2021), where he contributed to enable monetary policy maintain inflation low and stable and to safeguard the well-functioning of both financial and payment systems, in a context of external and domestic shocks. He fostered competition among financial intermediaries and consumer protection measures. He also promoted the digital payment platform CoDi, which allows to make free, secure and instant payments through mobile apps. Also, he pushed forward Banco de México’s agenda for sustainable development and greening the financial system, and he reinforced the strategy of transparency, accountability and communication with the public, implementing unprecedented measures that include disseminating institutional information and disclosure of the decision-making process as well as implementing webinars, blogs, and opening Banco de México’s Museum.

As CEO of Mexico’s Ex-Im Bank (Banco Nacional de Comercio Exterior, Bancomext) (November 2015 to December 2016), Alejandro Díaz de León Carrillo strengthened the institution’s capital by making a placement of Tier 2 subordinated debt (Basel III standard) (2016), the first of its kind for a development institution, and which was also recognized as Transaction of the Year by the World Finance. He implemented the adoption of the Environmental and Social Risk Management System (SARAS-Spanish acronym). As Head of the Ministry of Finance’s Public Credit Unit (2011 to 2015), he was responsible for the federal government’s financing strategy and issuance of domestic and external public debt, as well as for the oil hedging program. He was recognized by several financial publishers as Sovereign Issuer of the Year: Latin Finance (from 2011 to 2015) and Global Capital (2014 and 2015); and as Risk Manager of the Year by Energy Risk (2015).

On the other hand, as Head of the Federal Employee Pensions National Trust Fund (PENSIONISSSTE, for its Spanish acronym) (2007 to 2011), Alejandro Díaz de León Carrillo was responsible for starting operations with over seven million individual accounts, offering the lowest commissions and higher-than-average yields among retirement funds administrators (AFORES-Spanish acronym).

Alejandro Díaz de León Carrillo is Professor at the Master’s Program in Administration and Finance at the Autonomous Technological Institute of Mexico (Instituto Tecnológico Autónomo de México, ITAM). He holds a Master’s degree in Public and Private Administration with a major in financial engineering and valuation of derivatives and fixed-income instruments, from the Yale School of Management, as well as a Bachelors’ degree in Economics from ITAM with honors. His undergraduate thesis received the 1994 Banamex Economics Award, among others.

Bank for International Settlements (BIS). In addition to his ex officio posts as governor of Banco de México, he was elected to participate in the board of directors as well as in the Economic Advisory Committee, and the Innovation Hub.

Financial Stability Board (FSB). In addition to his duties as governor of Banco de México, he was appointed to participate in the Steering Committee on Non-Bank Financial Intermediation and was elected co-chair of the Cross-Border Payments Coordination Group.

International Monetary Fund (IMF). Alternate governor on the board of governors. He was lecturer of the 2021 Michel Camdessus Central Banking Lecture.

Throughout his career he has participated in numerous national and international working groups and economic research projects, as well as in collegiate bodies dealing with central banking, development banking and pensions.