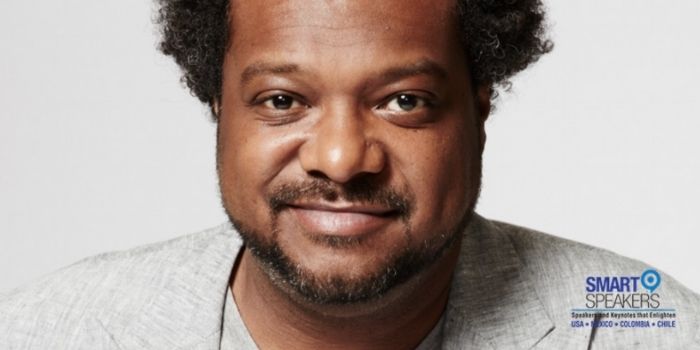 Bonin Bough is an awarded marketing expert with an illustrious career that includes C-level positions at Mondelēz International (Kraft), where he worked as the Chief Media & eCommerce Officer and PepsiCo, where he led the company’s global Digital Marketing efforts.

Bonin Bough is a top branding speaker, marketing expert, and the former Chief Media & eCommerce Officer at Mondelēz International. Bough has been responsible for some of the most successful organization transformations, and the rapid growth of some of the world’s most-loved billion-dollar brands including Oreo, Cadbury’s, Pepsi, Gatorade, and Frito-Lay.

Bonin Bough is an awarded marketing executive, the host of The Cleveland Hustles, and the author of Txt Me. Throughout his illustrious career as one of the youngest C-suite executives in a Fortune 50 company, Bough has spearheaded some of the industry’s largest global marketing campaigns across digital, mobile, television, print, and experiential, including the launch of the first ever 3D printed food product, the customizable, real-time 3D printed Oreo at the SXSW Festival.

As the Chief Media & eCommerce Officer at Mondelēz International (formerly Kraft Foods), he created some of the first marketing programs across Facebook, Twitter, YouTube, Paramount Films, ABC, NBC, Fox, to name a few, and took precedence in fostering partnerships with startups including Instagram, Foursquare, and Buzzfeed. Bough managed over $3 Billion dollars in media spend, making him the seventh largest media buyer in the world.

Bonin Bough has been responsible for some of the most successful organization transformations, and the rapid growth of some of the world’s most-loved billion-dollar brands including Oreo, Cadbury’s, Pepsi, Gatorade and Frito-Lay.  He helped brands like Sour Patch Kids become the fastest growing candy brand in the world.

Found consistently at the forefront of thinking and execution in innovation, Bonin Bough is recognized as one of the industry’s hottest rising stars and a top mobile marketer. He has been inducted into the Advertising Hall of Achievement. Bough can also be found in lists such as Fortune’s “40 under 40”, Fast Company’s 100 Most Creative People in Business, Ebony’s Power 100 and The Internationalist’s Internationalists of the Year. 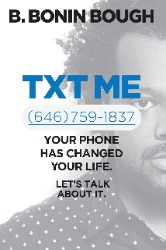 Txt Me: Your Phone Has Changed Your Life. Let's Talk about It.

In Txt Me, Bonin Bough, one of the world’s leaders in digital marketing, explores the exciting impact and future implications of mobile devices and digital communication on individuals, companies, and society. Including insights from the minds behind Coca-Cola, Conde Nast, NASCAR, and Twitter, Bough breaks down the often counterintuitive ways mobile devices and digital data are reshaping the way we experience, consume, and think.