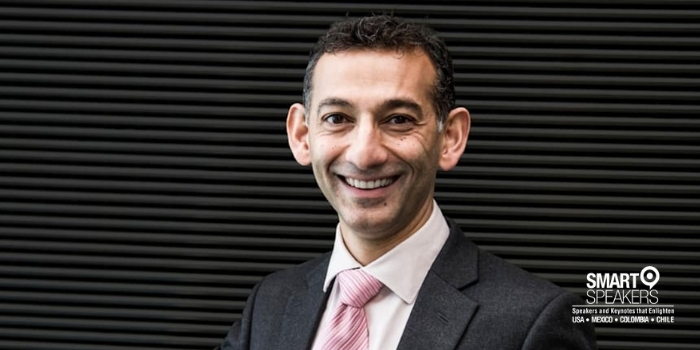 Dhiraj Mukherjee is co-founder of Shazam, the innovative music and video recognition app, one of the 20 most downloaded apps in history.

Dhiraj Mukherjee is a Co-Founder of Shazam, the world's first mobile phone-based music recognition service (acquired by Apple). He was named one of Europe's Top 50 technology entrepreneurs by the Financial Times.

Nowadays, Dhiraj Mukherjee is a "Tech for Good" investor, focused on mission-driven companies aiming to create a better future for the planet. He has invested alongside Bill Gates's Breakthrough Energy Ventures and in Al Gore's Generation Investment Management.

Also, Dhiraj Mukherjee is a globally recognised keynote speaker on innovation and sustainable business, and has spoken to senior executives and entrepreneurs in over 15 countries clients including Google, Airbus, Vodafone, Santander, The Economist and many more.

Dhiraj Mukherjee has a degree in Mathematical Economics from Dartmouth College, USA and an MBA from Stanford University's Graduate School of Business.