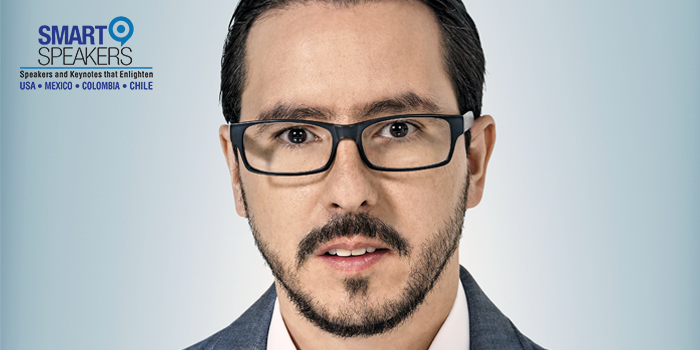 Renowned Mexican cybersecurity expert who has collaborated with Interpol, the UN and the US Secret Service in the investigation of cybercrimes. Andrés Velázquez is president and founder of MaTTica, the first Digital Research laboratory in Latin America.

Andrés has been involved in digital investigations, consultancies and specialized training for different organizations, public and private, with extensive experience in cybersecurity and in the investigation of computer crimes. His passion for technology led him to graduate as a Cybernetics and Computer Systems Engineer from La Salle University in Mexico City. Shortly after, in 2006, he founded the company MaTTica, a cybersecurity strategy  company in Mexico and Colombia that has the first digital research laboratory in Latin America, of which he is the president.

Currently, Andrés is part of cybersecurity committees of companies in the financial sector, and trains boards of directors on the subject of cybersecurity. The business magazine Expansión named him as one of 2017’s top 30 young leaders  . He has served as Executive Ambassador of the High Technology Crime Investigation Association (HTCIA) and Consultant to the Council of Europe in the GLACY (Global Action on Cybercrime Extended proyect).

He participated as an consultant to  the United States Secret Service in seminars on cybercrime and computer forensics, as well as specialized courses given to Investigating Agents in Colombia and Mexico on document falsification and investigation of financial fraud.

As a Speaker , Andrés has been  a top-level keynoter  for governments and private organizations on cybersecurity, digital investigations and forensic computing. He also shares with parents, teachers and young people about the risks that exist on the Internet and how to protect yourself from them. He is a professor of the Master's Degree in Cybersecurity at La Salle University, as well as a professor at the Tecnológico de Monterrey (TEC), Universidad Iberoamericana (IBERO), the Escuela Libre de Derecho, del Centro de Investigación y Docencia Económicas (CIDE), from the Instituto Tecnológico de México (ITAM) and visiting professor at many other universities. He is considered an opinion leader by written and television media where he constantly participates in explaining about cybersecurity and the elements related to computer crimes.

Conference | How to profile a cybercriminal?