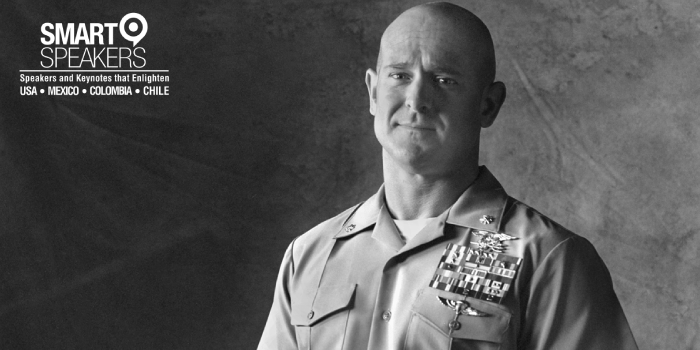 CEO of EF Overwatch and Former Recon Marine and Retired US Navy SEAL. Mike Sarraille is Co-Author of the Best-Selling Book “The Talent War: How Special Operations and Great Companies Win on Talent.”

Mike Sarraille is the CEO of EF Overwatch, an executive search and talent advisory firm, and leadership consultant with Echelon Front. He is a former Recon Marine and retired US Navy SEAL officer with twenty years of experience in Special Operations, including the elite Joint Special Operations Command. He is co-author of the best-selling book “The Talent War: How Special Operations and Great Companies Win on Talent.”

Mike Sarraille is a retired U.S. Navy SEAL officer, founder and board of director for the VETTED Foundation, a 501(c)3 Veteran executive education platform, a graduate of the University of Texas McCombs Business School, and a leadership instructor and strategic advisor for Echelon Front, a management consulting firm. Mike served fifteen years as an officer in the SEAL Teams and five years in the U.S. Marine Corps as an enlisted Recon Marine and Scout-Sniper before receiving his commission in the Navy. Mike served in SEAL Team THREE, Task Unit Bruiser alongside Extreme Ownership authors Jocko Willink and Leif Babin where he led major combat operations that played a pivotal role in the Battle of Ramadi in 2006. Mike again deployed with Task Unit Bruiser in 2008 and led historic combat operations in Sadr City during the Battle of Route Gold.

Following his return, Mike Sarraille assumed duties as the primary leadership instructor for all officers graduating from the SEAL training pipeline, taking over that role from Leif Babin. Mike was then selected for assignment to the Joint Special Operations Command where he completed multiple combat deployments in support of the Global War on Terrorism. Mike Sarraille is a recipient of the Silver Star, six Bronze Stars, two Defense Meritorious Service Medals, and a Purple Heart. Mike continues to participate as a Veteran Transition subject matter expert on panels across the nation. 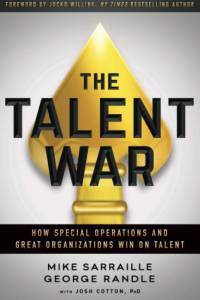 In our modern business landscape, the war for talent is more complex than ever. You need to attract and retain the best talent for your organization to win, but without the right strategy or mindset, you won’t be able to compete. If your revenue is declining, you’re losing market share to your competition, or your organizational health is deteriorating, it’s time to evolve how you approach this never-ending war. After all, your PEOPLE—not your product or service—are your strongest competitive advantage.

The Talent War explores how US Special Operations Forces (SOF) assess, select, and develop their world-class talent. You’ll learn how to adopt a talent mindset, the single greatest weapon you can possess in the war for talent. When your organization reflects this mindset, you will hire, train, and develop the right people, and put them in the best positions to make decisions that allow you to retake the advantage and win the war.

Talent War: Building High-Performing Team
Based on the best-selling book, The Talent War: How Special Operations and Great Companies Win on Talent.

After twenty years of experience as a US Navy SEAL, including Joint Special Operations Command, Mike’s ability to define and recognize elite talent is beyond comparison. In his best-seller The Talent War, Mike teams up with Strategic Advisor George Randall to translate the US Special Operations community’s ability to select and train raw talent into methods for the corporate world. In this talk, he explains how your team can make the shift from hiring skills to hiring character.

To build the strongest team, you must recognize the best talent. To build a winning team, you must then develop and manage your talent. Let Mike guide you to hire better people and build an elite team that can take on any challenge.

Lead Like Your Lives Depend on It
Mike’s leadership skills were forged through life-threatening situations during his time as a Tier One Navy SEAL. From escaping gun-fire to near-misses with grenades, he and his team survived it all by relying on the principles of his SEAL training. Mike has created a science for leading in high-pressure situations that will teach you how to remain composed and tactical under stress.

You don’t have to go behind enemy lines to learn Mike’s techniques. He’s sharing the lessons that built his unshakeable leadership to help you become a leader your team can trust.

Creating a Culture You Can Count On.
Mike has spent twenty years in the US Navy working with teams whose readiness, solidarity, and communication mean life or death. He will teach you how to recruit elite talent that will serve as a backbone for strong company culture, while his rare Navy SEAL insights will inspire your company to work as one through accountability and respect.

Bring your team together to be a steadfast unit that has each other’s back when it matters most, all leading to the creation of the only culture that matters – a culture of decentralized command.

Motivating Through Anything
Through stories from his time as a US Navy SEAL Special Operations Officer of a Recon Marine and Scout-Sniper, Mike will take you on a thrilling ride through the ups and downs his elite team experienced. Each account comes with a lesson that will broaden your view of working as a team, overcoming adversity, and being accountable to yourself and your team.

His exhilarating stories of surviving enemy attacks through tenacity and decisive leadership will inspire your team to persevere through any obstacle they may encounter.

Resilience: Overcoming Your Toughest Enemy.
Whether you’re fighting in a war or preparing an important pitch, we all have a common enemy—ourselves. During his Navy SEAL training, Mike learned there is no greater enemy than ourselves. Overcoming the doubts in our minds is the key to resilience and fortitude. There will always be external factors, like a client’s hesitation or an encroaching deadline, but your reaction determines the outcome.

Mike will show your team how to harness their individual power to champion any adversity and come back stronger than ever.