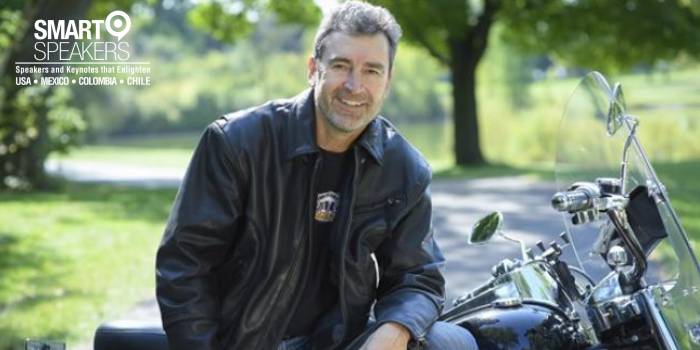 Ken Schmidt is a top customer loyalty speaker, author, and former Director of Communications at Harley-Davidson Motor Company. He shares stories and insights on the road to building a fanatically vocal customer base.

Ken Schmidt is a customer loyalty keynote speaker and the legendary former Director of Communications at Harley-Davidson Motor Company. Ken is widely known as one of the business world’s most outspoken and provocative thought leaders on customer loyalty and has partnered with many of the world’s most successful brands.

One of the most in-demand and premium-fueled keynote speakers and communications consultants in America, Ken Schmidt has lived a life that most can only dream about. He has toured the world on two wheels, met with presidents and royalty, partied with movie and music legends, and appeared numerous times on network news. As the former director of communications for Harley-Davidson Motor Company, he played an active role in one of the most celebrated turnarounds in corporate history—and got paid to ride motorcycles.

Ken Schmidt is widely known as one of the business world’s most outspoken and provocative thought leaders on customer loyalty and has partnered with many of the world’s most successful brands. He is the author of the book, Make Some Noise: The Unconventional Road to Dominance. Ken shares stories and insights on the road to building a fanatically vocal customer base, creating a passionately loyal corporate culture, and developing leaders who inspire and motivate. He is also a co-creator of Torque Sessions, which are highly-interactive engagements for executive leaders wanting to reposition their businesses to create distance from competitors, maximize profitability and strengthen customer and employee loyalty.

Today, Ken Schmidt shares his expertise with many of America’s leading brands but happily states that he is “semi-retired,” which allows him to pursue his other passions. He calls working with the grandson of one of Harley-Davidson’s founders to create 100 Years of Harley-Davidson, the best-selling motor sports book of all time, one of the greatest highs in his life. After all he has accomplished his philosophy of life and business hasn’t changed: “Never do what’s expected, make yourself as noticeably different as possible, and have a lot more fun than you’re supposed to.”

Make Some Noise: The Unconventional Road to Dominance 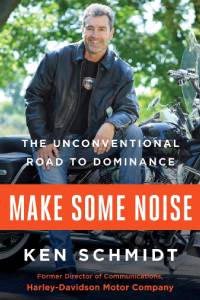 In Make Some Noise, Schmidt shares his full-throttle approach for businesses and individuals alike. Anyone looking to become more competitive and grow customer loyalty can learn from the case studies and experiences he shares. From a nondescript heavy construction company, to the most high-end “luxury” gas station in America, to Apple, and to his own personal landscaper, Schmidt illustrates how the answers to his trio of questions will yield a course of action to stand out in today’s marketplace.