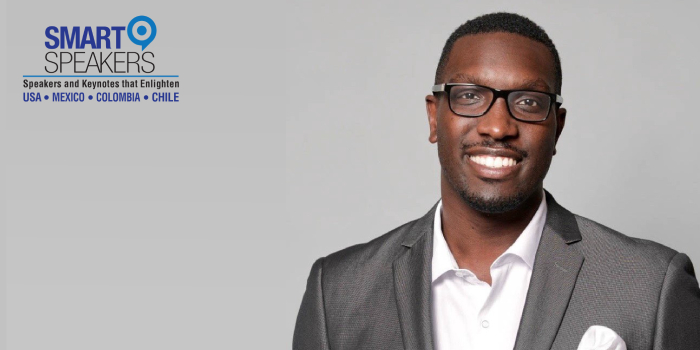 A two-time award-winning journalist, health disparities activist, and dynamic speaker, Dr. Kevin Ahmaad Jenkins is one of the most electrifying voices in America dedicated to eliminating racial health disparities. Enlightening the masses on how racism negatively influences health, workplace culture, and organizational performance.  He leverages innovative data-driven strategies to improve the quality of health and the standards of healthcare services of racial and ethnic minorities - along with helping organizations enrich their culture by leading critical conversations about today’s tough topics.

Prior to embarking on a professional voyage as a Lecturer within the Ivy League, Dr. Kevin Ahmaad Jenkins covered many major sports and entertainment events throughout the state of North Carolina. Famous across the state as the First Announcer to host the Central Intercollegiate Athletic Associations’ (CIAA) Super Saturdays, he relished entertaining crowds of 20,000+ sports fanatics for six consecutive years from 2000 to 2006. He was also the first weekend host of the North Carolina Educational Lottery and has served as the Public Speaker Announcer for North Carolina Central University and the On-Field Announcer for the Triple-A Affiliate for the Tampa Bay Devil Rays and the Durham Bulls.

He keenly delivers evidence-based solutions to dismantle the effects of racism from health, healthcare, and healthcare decision-making. Dr. Kevin Ahmaad Jenkins articulates his real-life experiences and enduring knowledge through powerful presentations, lasting empathy, and straight-talks to lead strategies focused on diversity, equity, and inclusion-to-action. He has successfully navigated academics, healthcare, and corporate arenas as both a thought-leader and consultant working with notable clients such as McKesson Pharmaceuticals, Johnson & Johnson, McDonald’s, Duke University, and Virginia Department of Health and Human Services.

Acknowledged as a national authority in racism in medicine, Dr. Kevin Ahmaad Jenkins has received a wide range of acclamation and recognition. His contributions have focused on breaking the social stigmas relating to racial injustice in the fields of healthcare. His efforts in analyzing the link between racial stress and vascular-based diseases & Alzheimer’s disease have received an extensive commendation from the leading health and education authorities.

Named among the 40 Under 40 Leaders in Health by the National Quality Forum, his contributions have been featured in media outlets such as ABC World News, The Grio, Philadelphia Inquirer, The Philadelphia Tribune, and NBC. Dr. Kevin Ahmaad Jenkins serves as a fellow within the Veteran’s Health Administration’s Office of Minority Health and on the National Academies of Science, Engineering, and Medicine’s Roundtable on Health Equity.

In the past, Dr. Kevin Ahmaad Jenkins has served as a Writer for The Daily News Jacksonville, NC, and a Columnist for the Durham Herald-Sun and BlackDoctor.org. He attained his Bachelor’s Degree from North Carolina Central University, a Master’s Degree from Florida A&M University, and received his Ph.D. in Sociology and Criminology & Law from the University of Florida.

A catalyst for change that opens the path to healing dialogue.

Tough corporate conversations about inequity where we work, live, and learn can intimidate anyone. The toxicity of corporate environments surfaces when we host dialogue with no destination. No matter the conflict or crisis, organizations need to know why and how to lead critical conversations about tough topics. Dr. Kevin provides a roadmap and guides your company through the art of authenticate engagement that reconstructs corporate culture.

This powerful topic can be delivered as a keynote or workshop for your team.

Under Construction: Rebuilding Corporate Culture with DEI in Mind

Renovating a structure that’s already standing remains more difficult than building from the ground up.

Dr. Jenkins brings over a decade of consultation with high performers spanning multiple industries to every employee on your organizational chart.

Win When carves a roadmap to professional development through research, humor, and powerful storytelling. Leaning on his past and present platforms, Dr. Jenkins curated the best-practices of Black former professional athletes, veterans, and physicians that confronts, informs, and heals the consequences of bias within American organizations.

As we all wrestle with remote working, Dr. Jenkins created a racial competence corporate training system that is specifically designed for 30 to 90 days of highly-personalized engagement that goes straight to your employees preferred digital platforms. The Winning Race DE&I Platform provides executives, managers, and teams with though-provoking weekly content. This groundbreaking software allows participants to explore the most perplexing issues of race, racism, and organizational dynamics through the short 2-minute videos that unlock the personal, self-paced journey to Winning Race. The Winning Race DE&I Platform deploys assessment tools throughout the program allows us to gather honest, anonymous insights from employees to create a full report for leadership after the program concludes. Participants can send regular feedback to maintain accountability with Dr. Kevin and his team powered by the tech platform Align Anywhere. Align Anywhere is already being used by companies like Capital One and Northwestern Mutual to great success.

DE&I STRATEGY
Methodologies that Visualize Organizational Culture that is Driven by Difference.