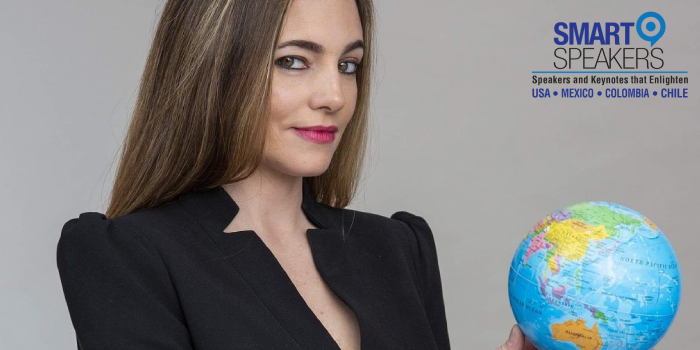 CEO and co-founder of Libelium. Alicia Asín is an expert keynote speaker in Internet of Things, AI and smart cities.

Alicia Asín is the CEO and co-founder of Libelium, the Spanish IT company that has created “Waspmote”, a wireless, modular and open source sensor hardware platform for the Internet of Things (IoT).

As a speaker, Alicia Asín provides great insight on data mining, particularly addressing the big questions surrounding Big Data and the relevance of security and privacy in the new IoT era. In addition, thanks to her considerable professional experience, Asín is considered a ground-breaking keynote speaker on issues concerning the use of IoT to promote democracy and transparency, intelligently addressing the risks technology will face, as well as the opportunities it offers as a catalyst for sustainability. Alicia clearly explains the potential of technology in general and of IOT in particular to maximize the social impact for organizations - especially in the private sector - already in the development phases, as well as their capacity to contribute decisively to the Sustainable Development Goals 2030, thus responding to a generation of committed consumers.

Her presentations are also invaluable for audiences interested in exploring the main challenges faced by cities of how to become sustainable and smart.

Alicia Asín has dedicated aconsderable part of her career figuring out how technology can change the world through the development of programs such as smart cities and precision agriculture. Libelium develops projects to monitor and improve crop efficiently via environmental control systems to prevent climate change. Their IoT technology is also helping developing countries to universalize access to health care services thanks to e-health control equipment. These disruptive applications allow Libelium to be present in more than 120 countries worldwide. The Financial Times has praised Libelium after the Mobile World Congress 2016 by naming Asín’s company as one of the Spain’s baby unicorns.

Alicia Asín has been internationally awarded for her entrepreneurial career merits and contributions to technological innovation. In 2021, Alicia has been recognized as one of the Top 7 IoT Thought Leaders to Follow in 2021(AI Tech Park). In 2007 she was awarded the WCEA with the highest distinction for her research in Computer Architecture. She was also the first Spanish woman to receive the National Young Entrepreneurs Award in 2014. Her merits have also allowed her to become a “Spanish with Talent”, a distinction awarded by Marca España that allowed her to lead the worldwide campaign for the international diffusion of Spain’s prestige, where she featured with figures such as the singer Alejandro Sanz. The 2016 National Computer Science Price recognized the merits of her career and role in the progression and internationalization of her company. In October 2017, Alicia Asín has received the Award “Rey Jaime I” fom His Majesty the King and Queen of Spain, the highest distinction for scientists, researchers and entrepreneurs. In June 2018 she was awarded with the 2nd position of the European Commission Price for Women Innovators.

- Data mining. Big data. Big questions.
- IoT to promote democracy and transparency
- Main cities' challenges to be smart and sustainable
- Reflections on the loT on its way to 2020: Risks and opportunities of the IoT towards a legacy of greater transparency and democracy.
- How technology will save the world.