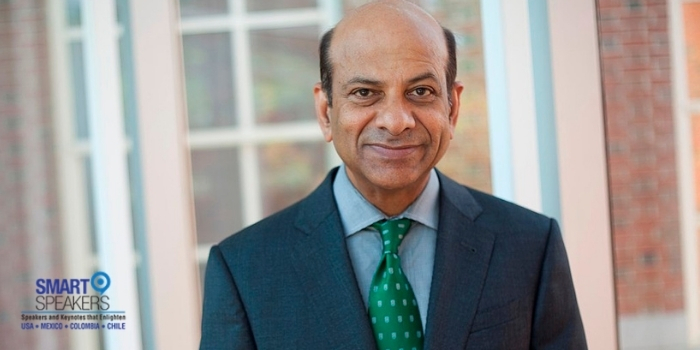 Vijay Govindarajan is widely regarded as one of the world’s leading experts on strategy and innovation. He is a professor, best-selling business author, advisor to CEOs and creator of the concept of Reverse Innovation, which Harvard Business Review considers the most important business idea of the decade.

Vijay Govindarajan, known as VG, is widely regarded as one of the world’s leading experts on strategy and innovation. He is the Earl C. Daum 1924 Professor of International Business at the Tuck School of Business at Dartmouth College. He was the first Professor in Residence and Chief Innovation Consultant at General Electric. He worked with GE’s CEO Jeff Immelt to write “How GE is Disrupting Itself”, the Harvard Business Review (HBR) article that pioneered the concept of reverse innovation – any innovation that is adopted first in the developing world. HBR picked reverse innovation as one of the Great Moments in Management in the Last Century. In the latest global ranking of management thinkers, Govindarajan came in third place.

Named a “Rising Super Star” by The Economist, Vijay Govindarajan writes about innovation and execution on his blog, Harvard Business Review, and Bloomberg BusinessWeek. He is a co-leader of a global initiative to design a $300 House. Prior to joining the faculty at Tuck, he was on the faculties of Harvard Business School, INSEAD (Fontainebleau) and the Indian Institute of Management (Ahmedabad, India).

The recipient of numerous awards for excellence in research, Vijay Govindarajan was inducted into the Academy of Management Journals’ Hall of Fame, and ranked by Management International Review as one of the Top 20 North American Superstars for research in strategy and organization. One of his papers was recognized as one of the ten most-often cited articles in the entire 40-year history of the Academy of Management Journal.

Vijay Govindarajan is a rare faculty who has published more than ten articles in the top academic journals (Academy of Management Journal, Academy of Management Review, Strategic Management Journal) and more than ten articles in prestigious practitioner journals including several best-selling HBR articles. He received the McKinsey Award for the best article in HBR. He published the New York Times and Wall Street Journal Best Seller Reverse Innovation.

Rated in the Top Five Most Respected Executive Coach on Strategy by Forbes, Vijay Govindarajan has worked with CEOs and top management teams in more than 25% of the Fortune 500 firms to discuss, challenge, and escalate their thinking about strategy. His clients include: Boeing, Coca-Cola, Colgate, Deere, FedEx, GE, Hewlett-Packard, IBM, J.P. Morgan Chase, J&J, New York Times, P&G, Sony, and Wal-Mart. He has been a keynote speaker in the BusinessWeek CEO Forum, HSM World Business Forum, TED and World Economic Forum at Davos. Govindarajan is a fellow at Innosight, an innovation consulting firm.

We now live in an era of constant change, driven by the dynamic forces of technology, globalization, the Internet, changing demographics, and shifting customer preferences. As a result, companies find that their strategies need almost constant redefinition—either because the old assumptions are no longer valid, or because the previous strategy has been imitated and neutralized by competitors.

The Other Side of Innovation: Solving Breakthrough Businesses Within Established Organizations

VG can help you understand the three fundamental challenges faced by strategic experiments, and can offer several specific recommendations to help you overcome them. Govindarajan reveals where firms go wrong on their journey from idea to execution—and outline exactly what it takes to build a breakthrough business while sustaining excellence in an existing one.

This presentation focuses on executing Box 3 strategies. VG has developed the 3 Box Thinking to Strategy: Box 1 (Manage the Present), Box 2 (Selectively Forget the Past), Box 3 (Create the Future). Box 1 is about Efficiency and Boxes 2&3 are about Breakthrough Innovation. VG’s mission is to help companies successfully create the future (Boxes 2&3) while managing the present (Box 1)—simultaneously excel in innovation and efficiency.

In this Reverse Innovation Module, VG introduces the idea of developing in emerging markets first – instead of scaling down rich-world products – to unlock a world of opportunities for your business.

The ideas in VG’s presentation on Global Strategy and Organization are drawn from the book he wrote with Anil K. Gupta titled, The Quest for Global Dominance: Transforming Global Presence into Global Competitive Advantage. The book is an outstanding guide for executives charged with global expansion and maximizing the potential of a global organization. 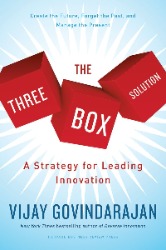 The Three-Box Solution: A Strategy for Leading Innovation

Innovation guru Vijay Govindarajan expands the leader’s innovation tool kit with a simple and proven method for allocating the organization’s energy, time, and resources—in balanced measure—across what he calls “the three boxes”: 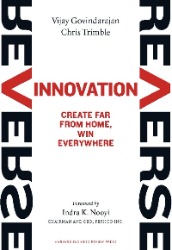 Authors Vijay Govindarajan and Chris Trimble of the Tuck School of Business at Dartmouth explain where, when, and why reverse innovation is on the rise and why the implications are so profound. Learn how to make innovation in emerging markets happen and how such innovations can unlock even greater opportunities throughout the world. 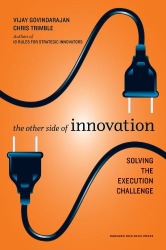 The Other Side of Innovation: Solving the Execution Challenge

In The Other Side of Innovation, Vijay Govindarajan and Chris Trimble reveal how to execute an innovation initiative—whether a simple project or a grand, gutsy gamble; drawing on examples from innovators as diverse as Allstate, BMW, Timberland, and Nucor.

Summary of The Three Box Solution by Vijay Govindarajan