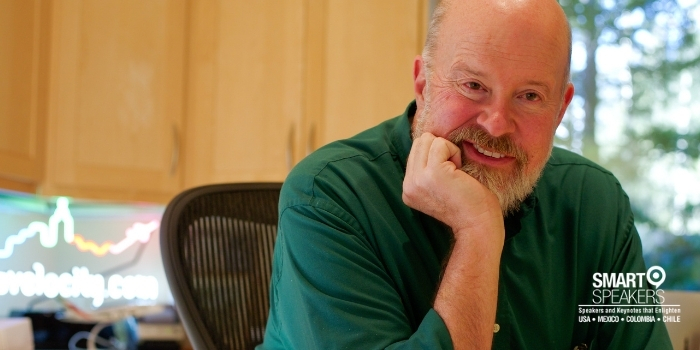 Terry Jones is a pioneer of the Digital Age that transformed the aviation and travel industry. He is the founder of Travelocity, one of the world's first and most successful traveler sites, and Kayak, the world's most popular fare comparison site.

Best known for founding Travelocity.com and serving as founding Chairman of Kayak.com, Terry Jones has become a powerful voice in the world of entrepreneurship through his numerous speaking engagements and the publication of his books, ON Innovation and Disruption OFF. His career path has established him as a thought leader on innovation in our post covid and increasingly digital world.

A graduate of Denison University in Granville, Ohio, Terry Jones began his career as a travel agent, spent 24 years at American Airlines in marketing and information technology, capping his career as Chief Information Officer of its SABRE division. While at SABRE, Jones led a team of six working on a project that became Travelocity.com. He served as CEO of Travelocity for seven years transforming it to a public company with three billion dollars in travel sales.

Terry Jones left Travelocity when the company was taken private and became part of the founding team at Kayak.com, a company that yet again revolutionized how travel was purchased. He served as Chairman of the company from its founding until it was sold to Priceline for $1.8 billion dollars in 2013.

Today, Terry Jones is the managing principal of ON Inc., a consultancy he founded to help companies transition to the digital economy. Jones is the author of the best selling books, ON Innovation and Disruption OFF, and is the holder of several patents.

Terry Jones has served on over 17 boards and currently serves on the boards of Boingo, Sonicwall, Kenzie Academy, Crytica and Camping and Education Foundation.

In this presentation, Terry Jones explores the fundamentals of innovation and gives leaders simple but powerful ideas to create a more innovative organization.

Terry reviews the top 10 technical forces of disruption and what you can do about it. Leaders are worried. Businesses are being disrupted at an ever-increasing pace and technological advances are converging to create unprecedented dislocation. Terry shows how to identify these forces - and how to turn them to your advantage.

Terry Jones gives your audience the keys to unlock the mystery of dealing with today's omnichannel customers. While face-to-face contact isn't going away, companies that lack an effective online relationship strategy are setting themselves up for failure. From search to social, mobile to big data, local to logistics, Terry will cover what you need to know now to keep 21st-century customers satisfied. 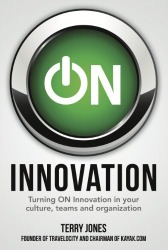 Terry Jones’ book ON Innovation counters the management-book tradition in which empty slogans too often take the place of actual thinking. Jones returns our attention to hard won insights learned from creating 10 startups and working for some of corporate America’s best mentors, and he does so with a light hand and a wry sense of humor. You’ll come away from this book enriched, even if you only dip into it in 10-minute snatches now and again. 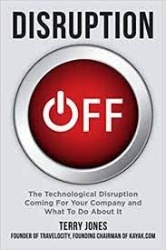 Disruption Off: The Technological Disruption Coming For Your Company And What To Do About It

Worried your company won’t survive in the fast-changing, high-tech world? Discover innovative strategies to future-proof your profits. Do you worry young, cutting-edge companies will push you out of the market? Do you wish your organization was the one doing the disrupting? Terry Jones has battled the frontlines of business disruption. And now he’s here to share his hard-won wisdom and insider tips to give you an edge in an increasingly volatile market.