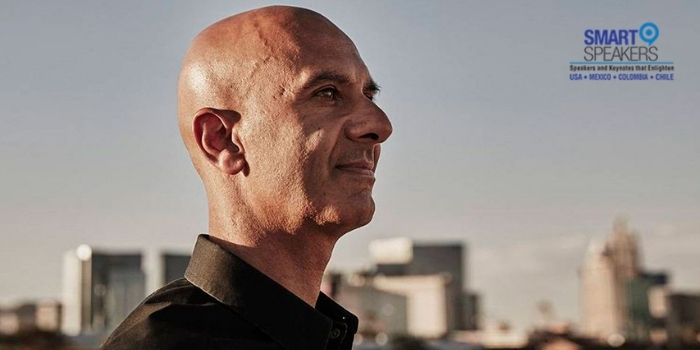 Robin Sharma is considered to be one of the top 5 leadership experts in the world. His work is embraced by rock stars, royalty, billionaires and many celebrity CEOs.

A former lawyer, Robin Sharma quit his job and self-published a book at a Kinko's copy shop. His second book, The Monk Who Sold His Ferrari, was also originally self-published until former HarperCollins president Ed Carson discovered Sharma in a bookstore. The book, and the series that followed, have become one of the world's most successful publishing franchises.

Robin Sharma is one of the world's premier speakers on Leadership and Personal Mastery, recently named one of the World's Top Leadership Gurus. As a presenter, Sharma has the rare ability to electrify an audience yet deliver uncommonly original and useful insights that lead to individuals doing their best work, teams providing superb results and organizations becoming unbeatable.

For nearly 20 years, many of the most well-known organizations on the planet, ranging from Nike, GE, Microsoft, FedEx, PwC, HP and Oracle to NASA, Yale University and YPO have chosen Robin Sharma for their most important events, when nothing less than a world-class speaker will do.

Robin Sharma's books such as The Leader Who Had No Title have topped bestseller lists internationally. Sharma has been ranked as one of the Top 5 Leadership Experts in the World in an independent survey of over 22,000 businesspeople and appears on platforms with other luminaries such as Richard Branson, Bill Clinton, Jack Welch and Shaquille O'Neal.

The Robin Sharma Foundation for Children (RSFC) is a registered charitable foundation founded by Robin Sharma. The Foundation raises funds from around the world and donates them to children's causes.

Leadership in a Post-Pandemic World: 8 Winning Moves to Prosper in Times of Deep Change

In this inspiring yet highly tactical presentation, Robin Sharma will share 8 transformational insights as well as a series of daily behaviors that will create strong growth in the creativity, productivity and impact of your team in this post-pandemic age.

Digital Workshop: Elite Performance Leadership in Turbulent Times-- How The Best Win in A New World

Robin Sharma offers a compelling customizable digital workshop on how individuals, teams, and organizations can thrive, even in these challenging times. The presentation also comes with a workbook that participants will use throughout for robust tactical value.

Lead Without a Title: Winning Leadership Lessons to Build a Great Organization

In this viscerally inspiring, idea-rich and immensely practical presentation your people will learn transformational ways to get your people operating at world-class, the 4 core behaviors to shift from any form of average work to genius-level results, and powerful tools to relentlessly innovate and wow customers in volatile time and tactics to show leadership at every level of the organization. 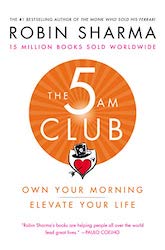 The 5AM Club is Robin Sharma's masterwork, blending his original insights into legendary leadership, uncommon creativity and exponential productivity with battle-tested tools to help you produce work that allows you to dominate in your field—while you live a life that inspires the world. 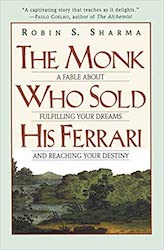 The Monk Who Sold His Ferrari

This inspiring tale provides a step-by-step approach to living with greater courage, balance, abundance, and joy.  A wonderfully crafted fable, The Monk Who Sold His Ferrari tells the extraordinary story of Julian Mantle, a lawyer forced to confront the spiritual crisis of his out-of-balance life. 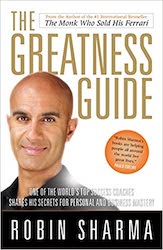 Make the leap today and learn what the best do to become even better. The Greatness Guide will show you exactly how to experience remarkable results in each of the important areas of your life while enjoying the journey of living.

WGS17 Sessions: The Anatomy of a Future Leader