Robert Herjavec is one of North America’s most recognizable business leaders. He has built and sold businesses on his way to amassing a personal fortune of over $100 million dollars and his celebrity has expanded with leading roles on Dragons' Den, the #1 TV show on CBC.

Robert Herjavec is one of North America’s most recognizable business leaders. Born in Eastern Europe, he arrived in North America on a boat with his parents after escaping Communism in the former Yugoslavia. From delivering newspapers and waiting tables, to launching a computer company from his basement, his drive to achieve has led him to the fulfillment of a better life for himself and his family.

Robert Herjavec’s inspiring books all appeared on bestsellers’ lists: Driven, The Will to Win and You Don’t Have to Be a Shark: Creating Your Own Success.

Robert Herjavec’s motivational business advice has received millions of impressions through TV, print, radio and digital media. He shares his expertise with other entrepreneurs each week as a leading Shark on ABC’s Emmy Award-winning hit show, Shark Tank. Robert placed 6th with partner Kym Johnson, when he competed for the mirror ball trophy in season 20, of the popular show, Dancing with the Stars.

For several years, Robert Herjavec competed as Ferrari #007 for Herjavec Group Racing in the Ferrari Challenge North America Series, achieving multiple podiums and winning Rookie of The Year in 2011. To him, running a business is a lot like one of his greatest passions, racing cars. He believes, “You have to stay laser-focused when driving a car over 200 miles an hour, and the same approach is required when growing a business in today’s world of rapidly changing technology.”

See what happens when an executive member of your team or MC tables turn on Shark Tank’s Robert Herjavec, when he finds himself in the hot seat answering questions on business trends, entrepreneurship and revealing a few secrets from inside the Shark Tank. This fireside chat is a great way to customize Robert’s appearance to your corporate goals and messaging, with an opportunity to engage audience participation.

Technology is constantly transforming, creating new possibilities and risks in the business world. Dynamic IT entrepreneur and Founder & CEO of global cybersecurity firm Herjavec Group, Robert Herjavec, will explore evolving technology trends, and the rising cyber security threats we face personally and professionally daily. He will reveal a few secrets from inside the Shark Tank and inspire anyone willing to keep up in a fast-moving world.

The Will to Win

Anyone can succeed, as long as they’re willing to take chances, take control of their future and stay true to their vision. Shark Tank’s Robert Herjavec, reveals the secrets and sales tips that took him from waiting tables to growing his nascent technology company into a world-class conglomerate. He shares life principles that are as valuable in the living room as they are in the boardroom, that will resonate and motivate your team and audience. 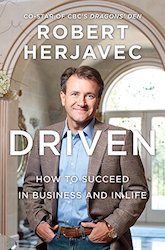 Driven: How to Succeed in Business and in Life

In Driven, Herjavec shares the secrets that took him from his job waiting tables to growing his nascent technology company into a world-class conglomerate, The Herjavec Group. Herjavec’s principles are as valuable in the living room as they are in the boardroom. Anyone can succeed, on their own terms, by following his sage but simple advice—if they’re willing to take chances, to take control of their own future and to stay true to their own visions. 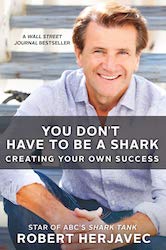 You Don't Have to Be a Shark: Creating Your Own Success

In You Don't Have to Be a Shark, Robert transcends pure sales techniques and teaches "non-business people" what they need to know to sell themselves successfully. We are each our own greatest asset, and to achieve our goals, we need to be able to communicate with others, position ourselves and even look the part. 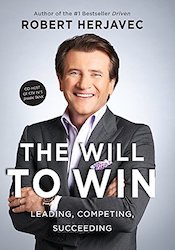 The Will To Win: Leading, Competing, Succeeding

In The Will to Win, he shares some of his own secrets for greatness, whether it’s knowing when to be aggressive (and when not to be), when to talk and when to listen, or when and how to ask the right questions. And he reminds us that we all have the same 24 hours a day in which to maximize our future—it’s how we spend those hours that counts.