Mike Abrashoff is an outstanding former Naval Commander, public speaker and one of the most remarkable modern day stories of organizational transformation.

Mike Abrashoff, Former Commander of the US Navy, took command of the worst ship in the United States Naval Forces and transformed it into the best ship in a space of a year without changing a single element of the crew, based on his style of leadership.

At 36, Mike Abrashoff was selected to be Commander of USS Benfold and was the most junior commanding officer in the Pacific fleet. The challenges of this underachieving destroyer were staggering, with low morale and the highest turnover rate in the Navy. Few thought the ship could improve, yet 12 months later it was ranked #1 in performance -- using the same crew.  How did Abrashoff do it? By replacing command and control leadership with commitment and cohesion. The lesson was clear: leadership matters and culture is everything.

Since leaving the Navy, Mike Abrashoff has worked with over 1200 organizations instilling leadership initiatives at every level, achieving phenomenal change in unexpected places.  Leaders especially identify with him being accountable for results in an environment where he couldn’t make the rules. Abrashoff focused on the one thing he could influence: his crew’s attitude, because culture is the ultimate competitive weapon for any organization. That’s why The Wall Street Journal, Fast Company and others have cited Abrashoff’s story.  It’s also why he is so popular with such a wide range of audiences.

As a keynote speaker, Mike Abrashoff has spoken to every industry and kind of audience, from board retreats to front line personnel, from sales groups to universities, from Fortune 500s to startups. He tailors his message to focus on engagement, execution, change, safety, diversity, leadership, teamwork, innovation, accountability and more.

Mike Abrashoff tells the inspiring story of how the USS Benfold was transformed into the best ship in the Navy by empowering the crew to take ownership and improve every aspect of the way things were done. As Abrashoff shares the methods he used to create successful change within the confines of strict military regulations, audiences come away with dozens of practical and actionable ideas to make a difference in their own team.

Mike Abrashoff addresses the challenges most on the minds of leaders in these challenging times. It's Our Ship is about creating a high performance culture where everyone takes ownership and responsibility using real lessons from the business world and focuses on innovation, accountability and engagement.

Sometimes in our professional lives we might think we are in a battle to beat an adversary or a competitor when in actuality we are really in competition with ourselves but just haven’t figured it out yet. This presentation will challenge audiences to think differently on how to set expectations while realizing the only limits that you have are self-imposed. 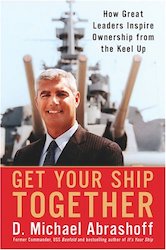 Get Your Ship Together: How Great Leaders Inspire Ownership From The Keel Up

Abrashoff never claimed to have all the answers. So he asked around, found some fascinating people in every branch of the U.S. military and the business world, and interviewed them about leadership and teambuilding. The result is Get Your Ship Together. 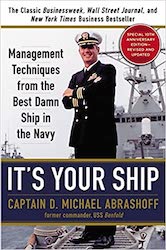 It's Your Ship: Management Techniques from the Best Damn Ship in the Navy

From achieving amazing cost savings to winning the highest gunnery score in the Pacific Fleet, Captain Abrashoff's extraordinary campaign sent shock waves through the U.S. Navy. It can help you change the course of your ship, no matter where your business battles are fought. 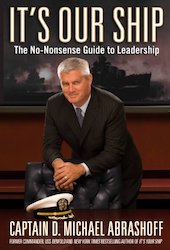 It's Our Ship: The No-Nonsense Guide to Leadership

Abrashoff will focus on the leadership, motivational, and management insights and tips that he has learned from his last six years of addressing business and corporate audiences. Abrashoff's timely advice will be eminently prescriptive, and will feature anecdotes and insights from leaders of businesses large and small and from public and non-profit sectors.