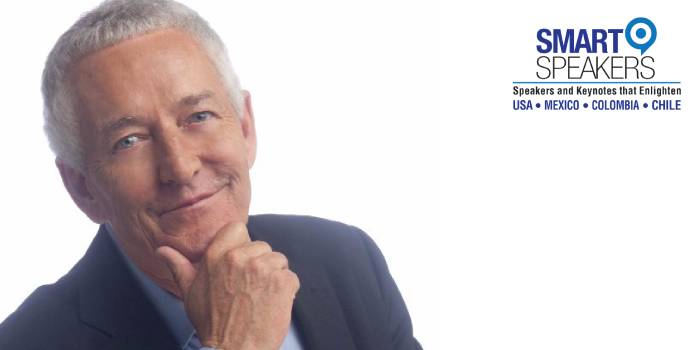 Jason Jennings is a Business and Leadership author and researcher. He is the author of the 2001 Harper Collins NY Times bestseller, 'It's Not The big That Eat The Small - It's The Fast That Eat The Slow'.

Jason Jennings is a thought provoking, highly skilled communicator who delivers the goods when it comes to leading people and companies to their full potential in the areas of revenue growth, reinvention, speed, productivity, leadership and employee engagement. He began his career as a radio and television reporter and was the youngest radio station group owner in the US.

Later, he founded Jennings-McGlothlin & Company, a consulting firm that became the world’s largest media consultancy and his legendary programming and sales strategies are credited with revolutionizing many parts of the broadcasting industry. Jason Jennings traveled the globe in search of the world’s fastest companies for his landmark book, It’s Not the Big That Eat the Small – It’s the Fast That Eat the Slow. Within weeks of its release it hit the Wall Street Journal, USA Today and New York Times Bestsellers Lists. Now published in 32 languages, USA TODAY named it one of the top 25 books of the year!

Next, he and his research teams identified the world’s ten most productive companies for his bestseller Less Is More. His next book, Think BIG – Act Small, which profiled the only ten companies in the world to have organically grown both revenues and profits by double digits every year for ten consecutive years. Like all his previous books it debuted on all the bestseller charts. His latest book, Hit the Ground Running – A Manual for Leaders reveals the tactics and strategies of the ten CEO’s who created the greatest amount of economic value between 2000 and 2009. Research is underway for his next book to be published in 2011, promises to reveal the secrets of those leaders and organizations that have successfully reinvented and transformed themselves. In total Jennings and his teams have screened and studied more than 120,000 companies.

Along the way he found time to join forces with well known cardiologist Dr. John Kennedy and coauthor the 2010 Health, Mind and Body bestseller, The 15 Minute Heart Cure –The Natural Way to Release Stress and Heal Your Heart in Fifteen minutes a Day. Jason Jennings highly anticipated new book, The Reinventors – How Extraordinary Companies Pursue Radical Continuous Change was just released on May 10, 2012.

Critics call his books, “extraordinarily well researched, insightful, crisply written, accessible, intriguing and a vital resource for everyone in business,” and USA TODAY calls Jennings one of the three most in-demand business speakers on the planet along with the authors of Good to Great and In Search of Excellence. 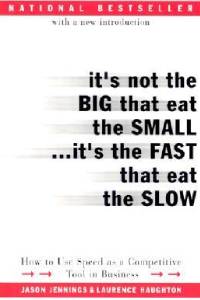 Conventional wisdom once told us big companies are unbeatable... and eat smaller competitors for breakfast. Not anymore. These days It's Not the Big that Eat the Small... It's the FAST that Eat the Slow!

Jason Jennings and Laurence Haughton discovered what separates today's icons of speed from everybody else.

They asked questions like:
What is the difference between speed and haste?
Where does business go to spot trends before the competition?
How can leaders help people stop dreading high velocity and rediscover the thrill of deciding, acting and staying fast?